Review: The Girl in the Spider's Web by David Lagercrantz tr. George Goulding

Today sees the release of book 4 in the Millennium series begun by Stieg Larsson, and now continued by David Lagercrantz in the shape of The Girl in the Spider's Web, translated by George Goulding.

London-based reviewer Craig Sisterson was able to get a copy at midnight and has very kindly shared his review with Euro Crime. This review first appeared on Crime Watch this morning: 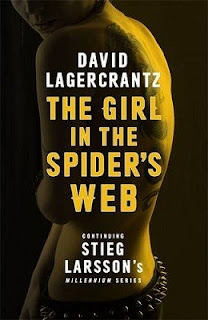 She's back. After all the waiting, anticipation, and controversy, Lisbeth Salander is back.

It starts with a hand, beating rhythmically on a mattress in an unknown bedroom. Why is the hand beating? Whose hand is it? Whose bedroom? What does it mean?

None of those questions are answered until much later in THE GIRL IN THE SPIDER'S WEB, and by then David Lagercrantz has taken readers on a heck of an absorbing ride.

Let's address the elephant in the room: not everyone will be happy with this novel. Many people in the books world seem to have decided to avoid it or dislike it on principle: that no-one should continue Stieg Larsson's series, the three books of an intended ten that he'd written but never published before his heart attack.

But those who approach THE GIRL IN THE SPIDER'S WEB with at least a partially open mind will find themselves pleasantly surprised; it's a very good book. It's terrific to see Salander, who is much more than an antisocial goth hacker, back fighting against injustice in a new adventure. In her own inimitable way.

Undoubtedly the creation of Salander was Stieg Larsson's greatest genius in his initial trilogy: while his tales were swirling epics addressing some dark issues simmering below the seemingly perfect surface of Scandinavian society, Salander was the lightning rod that elevated the stories into something more.

In THE GIRL IN THE SPIDER'S WEB Lagercrantz does a fantastic job at delving deeper into Lisbeth Salander, offering readers more of an insight into this 'grown up version of Pippi Longstocking' (as Larsson considered her). Lagercrantz treads the fine line between providing more texture about an enigmatic character, without losing the mystery and uncertainty that makes them so compelling in the first place.

Salander is the kind of iconic character who doesn't even need to be in the room to have a presence. Like James Bond, Zorro, Robin Hood, or Sherlock Holmes, she casts a shadow over a wider world, lingering in the minds and hearts of those she's touched, friends and foes alike.

Early on in THE GIRL IN THE SPIDER'S WEB, Mikael Blomkvist is battling against money-driven evisceration of Millennium, the magazine he loves, when he meets a potential source in a bar to discuss a story tip. Things are stock-standard, and Blomkvist's eyes are glazing as he listens to chat about technology and corporate espionage, when he - and the reader - is suddenly electrified by the passing mention of a female hacker. From there, the story becomes much more interesting, for Blomkvist and the reader.

As Blomkvist delves deeper, the story gets bigger and bigger. A world-renowned Swedish computer scientist, a verifiable genius, has seemingly abandoned his work and boarded himself up in his home. He wants to talk to Blomkvist, but is attacked before they can meet. His work has disappeared, and the only witness is an autistic child, who know becomes the target of a shadowy criminal organisation.

Lagercrantz does well juggling all the players in this tale, from the driven staff of the NSA, who see spying on everyone as the way to protect their country's interests, to Eastern European gangsters, Swedish authorities, and shadowy figures from Salander's own past. While Salander and Blomkvist are the stars, there is a broad cast of fascinating cast of characters who add texture and intrigue - and Lagercrantz does an elegant job keeping THE GIRL IN THE SPIDER'S WEB building then racing along rather than becoming convoluted.

For those who love Scandinavian crime for the way it delves into social and personal issues, there is plenty of that on offer in the fourth Salander book, from issues of privacy, what the public is entitled to know, to the various ways technology can be used and abused, the changing face of the media, and much more.

For me however, it is the evocation of Salander, who is one of the finest characters created in contemporary fiction, which is the real highlight of THE GIRL IN THE SPIDER'S WEB. Much like Christopher Nolan did with his tremendous re-imagining of Batman, Lagercrantz delves deeper into Lisbeth while keeping her very much who she is. We see more and understand more, but remain fascinated, intrigued, and unsure.

And when the final page came, I was no longer doubtful of whether the books should be continued or not. In fact, I am very much hoping that we will see more from Lagercrantz, Blomkvist and Salander in future.

Well, Amazon readers, both in the UK and US, are not quite as impressed as your reviewer. 3 and 3 1/2 stars respectively. It appears it's been officially released in the UK yet the volume of reviews is surprisingly low. The US pub date is Sept 1. I'll wait awhile to make a final judgment but I'll probably pass.