To celebrate the publication on Thursday of the new "Lisbeth Salander" book, The Girl in the Spider's Web by David Lagercrantz translated by George Goulding, I will be reposting Maxine's reviews of the original trilogy by Stieg Larsson translated by Reg Keeland, starting today with: 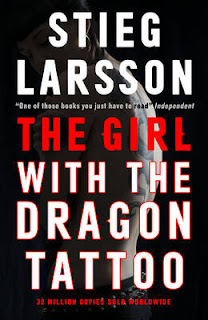 Mikael Blomkvist is a financial journalist in Sweden who, as publisher and co-owner of the independent magazine Millennium, is able to publish hard-hitting investigations into the shady dealings of the country's richest companies. He goes too far, however, in his story about the crooked but enormously wealthy financier Hans-Erik Wennerstrom. Wennerstrom sues Blomkvist for libel, Blomkvist loses and is sentenced to a few months in jail. Almost worse than the sentence is the fact that Millennium has lost credibility, not to mention advertising revenue, and its future is in jeopardy.

After Blomkvist's sentence, he and his on-off lover, fellow publisher Erika Berger, decide the best way to ensure the magazine's survival is for Mikael to take a year's leave of absence, during which time he will serve his jail sentence (clearly a very civilized procedure in Sweden). His confidence shaken by his experiences, Mikael is astonished to be summoned by Herr Frode, a lawyer, to meet the reclusive, wealthy Henrik Vanger, who has been following the case and who has a proposition for him.

Vanger is one of the oldest members of a family dynasty, of a completely different hue from Wennerstrom both personally and in business philosophy. However, the old man is haunted by a dreadful event in the 1970s, when his great-niece Harriet, then 16, vanished on the eve of the traditional annual gathering at the island where the old man and most family members live. The subsequent investigation of the disappearance was severely hampered by an road accident on the bridge connecting the island to the mainland: despite the most thorough investigation possible over the intervening years by both the police and her distraught great-uncle, the mystery of Harriet's disappearance was never solved, so it has been concluded by all that she had died. Nevertheless, every year on his birthday, the old man receives a single flower in a frame, a bitter-sweet memory of the birthday presents Harriet used to give him. Henrik cannot rest until he has discovered who is sending this taunting message, which he is convinced will lead him to Harriet's murderer.

Initially refusing Vanger's commission, Mikael changes his mind when he learns that not only will he be paid for his work but that Henrik will provide him with evidence to convict Wennerstrom - and by so doing will ensure the survival of Millennium. The two men agree that Mikael will live on the island inhabited by the various Vanger family members and, as cover, will write a biography of the family. In reality, however, he will be poring over old documents and questioning anyone who will speak to him to try to cast new light on the tragedy of Harriet's disappearance.

It does not take Mikael long to discover that he has been the subject of a covert surveillance himself to determine to Vanger's satisfaction his own suitability for the job. Via Vanger's lawyer Frode (an attractive if minor character), he soon discovers who is responsible: Dragan Armansky's investigative agency, specifically a highly unlikely operative called Lisbeth Salander. Lisbeth is an emaciated young woman, a drop-out from society, whose mother is in an institution and does not know her daughter. Lisbeth has a long history of childhood rebellion and refusal to conform, has been labelled dangerous by assortments of social workers, and is a ward of court unable to control her own finances or manage her own life apart from a shadowy existence with alternative, drop-out associates. She does, however, have amazing computer skills, and so is employed on a freelance basis by Dragan, who has mixed feelings for the young woman - she of the titular dragon tattoo.

Aided by Lisbeth, Mikael becomes increasingly absorbed in the biography, living in an isolated guest cabin on the island and digging into old photographs, befriending the local cafe owner, and gradually working through Henrik's archives, in the process befriending the old man, a poignant character. Mikael pieces together the complicated Vanger family - thankfully, the reader is helped by a family tree and a table (but in my edition, no map of the island, which would have helped) - to try to work out who might have had a motive and the opportunity to kill Harriet and dispose so completely of her body. He undergoes his prison sentence, a relief from his daily worries, but after that his investigation becomes bogged down - until a series of dramatic events provide him with a breakthrough of sorts.

In the meantime, we learn more about Lisbeth and her life, as well as her shocking persecution by her guardian and the revenge she enacts. Her character is intended to show us how a supposedly liberal and caring society can utterly fail someone who has a mild condition (Mikael immediately diagnoses her as having Asperger's), and how she and others like her can "slip through the cracks" into a life of abuse and poverty. First Dragan and than Mikael hold out a hand of help - in Mikael's case, he does not expect anything from her, so Lisbeth gradually comes to trust and even to love him.

Mikael and Lisbeth work together to solve the awful mystery of Harriet's disappearance - and it is, indeed, truly awful. Although the book is extremely leisurely (most of it is taken up with Mikael's researches into the Vanger history), the pace picks up at the end as all the threads come together in a suspenseful conclusion: Harriet's fate, the future of Millennium, Wennerstrom's power, the Vanger secret - and the shadow of a Nazi and racist past. Taken together with the story of Lisbeth, as yet incomplete as this is the first in a trilogy, the whole has a haunting power. Despite its length, and the fact that most of the Vangers encountered by Mikael are two dimensional, I very much enjoyed this powerful book which combines a good story with haunting characters and a crusading message.

The book is the latest in a fine tradition of Swedish fiction begun in the 1960s by Maj Stowall and Per Wahloo in their Martin Beck series, and continued by Henning Mankell and other excellent authors. THE GIRL IN THE DRAGON TATTOO is in the same vein as two other recent Swedish books: the superb PARADISE, by Liza Marklund, which covers similar themes of investigative journalism, financial mismanagement and racist violence against women (particularly immigrants) and Asa Larsson's SUN STORM, an intense story about a young woman unable to function in society after being ostracised by her family and community for her alleged rebellion. All three of these sad stories resonate in the mind long after the last page has been turned.