Review: The Unburied by Charles Palliser 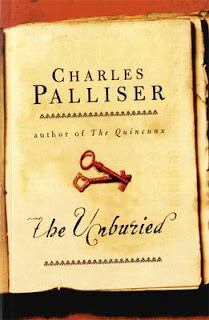 Dr Constantine is a university professor at Cambridge and is invited by an old friend to visit for a few days. He decides to visit his friend in Thurchester on his way to spend the Christmas holidays with his niece. Constantine also intends to combine his short visit with some research into the Cathedral Library and Archives in order to further his research into the death of Wulflac, a senior advisor of King Alfred, a project he is passionate about. Constantine finds his friend, Austin, much changed. A fellow student who was expected to follow the same academic path as Constantine, he now works as a tutor at the Cathedral School.

Austin welcomes his friend and they spend the first evening quietly at home and to pass the time Austin tells a story concerning a murder of a Canon-Treasurer and his ghost who still haunts the Cathedral Close.

Constantine soon realises that Cathedral politics are still causing rifts and factions amongst the men who work within its walls and tries to ignore them while carrying out his research. He is quite daunted when he realises the state of confusion of the documents he is hoping to search and finally realises that not only are the politics of the Cathedral impeding his search but so are the politics of his college in Cambridge. He is be-friended by an old man, Mr Stonex, who is renowned for his miserliness and for being anti-social due to his paranoia and fear of thieves. However, when Constantine arrives for tea with Mr Stonex he finds himself drawn into a murder investigation.

THE UNBURIED is a complicated story, set in the early years of the twentieth century and taking place in the closed, traditional and patriarchal societies of a Cathedral and a Cambridge College. It is written in a style that looks back to the great Victorian novels of Dickens and Trollope, which feels old fashioned now but is suited to the story. Two story-lines entwine through the book, that of Constantine's search for evidence to prove his theory and that of the murder that he is drawn into and sometimes the history that Constantine is researching is given in a bit too much detail and somewhat distracts from the main storyline

The book was originally published in 1999. This is a good read especially if you are a fan of Victorian novels.