Lin Anderson's The Special Dead is released today and is reviewed below by Amanda; check back next Tuesday for her interview with Lin. 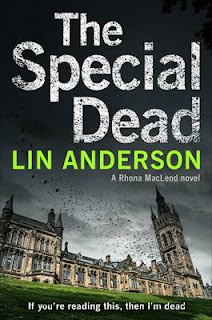 THE SPECIAL DEAD is the tenth in Lin Anderson’s series featuring her forensic scientist, Rhona MacLeod and it is everything that we have come to expect from this highly talented author. Rhona holds her own brilliantly, as usual – both professionally and in her private life – and it is always refreshing to see a successful and focused woman doing so well in her career.

After the traumatic ending to the last novel, PATHS OF THE DEAD, things are cold between her and her old pal, McNab. Demoted and demoralized, McNab tries to make amends with Rhona and stay away from the booze, the source of his troubles, but the secret they both share is getting harder to avoid. They both spend a significant amount of time in this novel making, drinking, and offering each other strong coffee. So much so that you can definitely smell it!

The story beings with Mark travelling through to Glasgow to enjoy a night out with his best mate. Placating his girlfriend by telling her that they are planning to play football, the lads go drinking and in search of girls instead. Much to his delight, Mark manages to pull Leila and she takes him back to her flat. High and drunk, he can’t believe his luck when she orders him to strip. Unfortunately, the night turns out to be slightly wilder than he had hoped: upon waking up, groggily, with only a dim recollection of what happened, he discovers that he is alone in bed. He decides to make a hasty exit but then makes the grim discovery of Leila’s lifeless body, hanging from a hook with a red silk cord round its neck, in a room with weird rows of Barbie dolls suspended from the ceiling. This is only the start of his trouble, especially when he decides that going to the police is not a very good idea.

Meanwhile, Rhona’s investigations indicate that Leila was a practising Wiccan. The red cord in particular suggests that sexual magick was involved and when another witch, one of Leila’s friends, is also found dead both Rhona and MacNab must hurry to solve the case before a third young woman, Freya, also loses her life.

Rhona MacLeod is one of my favourite crime fiction characters. I love the way she deals with everything that is thrown at her, but still has time for a bite to eat with Chrissy, her colleague, or a coffee with MacNab, despite their current differences. Rhona is very much her own person and comfortable in her own skin. She enjoys men but doesn’t want the complications of having one live with her; even though the thought is tempting after a tough day at work. THE SPECIAL DEAD, as with all the Rhona series, is an addictive change to the usual police procedural and looks at the world of crime through the eyes of a scientist instead. If you like books with feisty females in the lead then you are going to love this one. Next please!