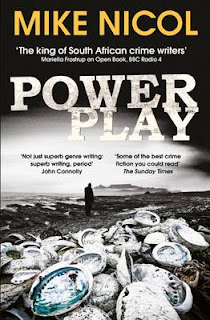 South Africa, Cape Town.
Prologue.
The big man sits beside the pool and watches Krista Bishop making coffee in her kitchen. She watches him. Takes a gun out of her bag and fits the silencer. His dark eyes remain on her and eventually he stands, his own gun in full sight. Krista thinks of her father Mace's words – about taking justice when it comes.
Lagoon Beach.
The Anders family are eating supper at a seafood restaurant by way of mourning the youngest son, Boetie. They must be seen in public at this time. Unbowed. Because Anders is an old-time retired gang lord and respectable businessman, one of “The Untouchables”. Boetie's weighted body had been found in deep water, chained to a plastic buoy marked “property of Titus Anders”. Quint, the youngest surviving son, assures his father that everything is sorted; the tit-for-tat boy is already chained up in the warehouse ready to be sent home to his mother in pieces. But the Anders children – Lavinia, Quint and Luc – still bicker about the next move. Titus tells them to shut up. Down the street, two men wait in a car. When the signal comes that the Anders family is leaving the restaurant, they start up and move alongside the Anders's heavy old Merc. Their window slides down and the Russian aims the Uzi.
Cape Town International Airport.
Krista Bishop and her security partner, Tami Mogale, greet the Chinese businessmen who seem delighted with their female security team. Tami and Krista have trouble defining the boundaries of their duties with their new clients. In the coffee shop across the way, a government agent watches the small party. He is Mart Velaze, the spook who put pressure on Krista to drop their strict women-only client base and guard these two businessmen. He had had to emphasise how easy it was for Krista's lovely house and car to disappear via a tax audit. So she accepted the job. As Velaze tails the group to their hotel, he receives a call from “The Voice” telling him to leave the businessmen and get over to Lagoon Beach – a shooting involving the Anders family.
Lagoon Beach.
In the adrenalin rush of the hit, Tamora's driver takes off early. The Russian is furious. A sharp turn results in him losing the gun to the road. The driver ignores his fury and drives on. Outside the restaurant, in the midst of shattered glass and bullet-holed steel, the Anders family take stock. Everyone OK, just cuts. And they recognised the driver. Tamora's man, Black Aron. The shooter? White. Czech, Russian, something like that. Titus tells his sons to finish the job with Tamora's son but Lavinia warns that nothing will be settled while the mother is still around.
Back at their hotel, the Chinese announce that they want to eat the famous abalone. But Tami reports that the seafood restaurant that they have in mind is out of bounds tonight. Some kind of shooting....

Mike Nicol is a South African writer who sets his crime thrillers in his native Cape Town. His latest thriller, POWER PLAY, continues the Bishop connection from Nicol's earlier “Revenge Trilogy” which concluded with BLACK HEART and featured the Cape Town security firm of Mace Bishop and Pylon Buso. The security firm is now in the hands of Mace's daughter Krista. With her business partner Tami Mogale she concentrates on a women-only client list. Rival gangs The Pretty Boyz and The Mongols are at war over the abalone poaching trade. For this, read three “retired” gang lords known as The Untouchables versus Tamara Gool, upcoming and ruthless. The Chinese arrive, wanting a slice of the abalone trade. With the war heating up, Krista and Tami soon have another woman client to protect – Titus Anders' daughter Lavinia. Then there are the government agents. All in all, a stew of revenge, riddles and violence. Revenge figures in this novel on an intense and bloody level. By the end I was thinking its emotions, motives and gestures were on a Shakespearean scale. Absolutely. Nicol's inspiration is Shakespeare's “Titus Andronicus”. But this is not a casual rip-off. It is well crafted, well voiced, dark and thrilling. Nicol has said of the potential of a crime novel: “...the fun you can have with characters having outrageous conversations after or during the most appalling situations. Appeals to my sense of humour...” and POWER PLAY's violence is truly bloody but Nicol's writing does not gloat. Instead he brings us a powerful, fast-paced, well-observed thriller set amongst the gangsters, businessmen and politicos of Cape Town. With its own blend of subtleties and vividly drawn characters POWER PLAY is an absolute recommend.

Another one to go onto the list of wants - when will it ever end?