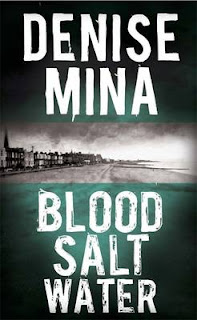 Iain and Tommy take an unidentified woman out to some sand dunes, near Loch Lomond and murder her. As she dies, Iain sucks in her dying breath, as she seems to say the name ‘Sheila’, the name of his mother. He feels that he has sucked in her soul and it is now trapped inside him. Driving back after dumping her body in the Loch, he cannot shake the feeling that she is inside him. He looks at his hands, which have traces of watery blood, and remembers that his mother once told him that only salt water lifts blood. But they’d dumped the body in a fresh water loch. The effects on his psyche of committing his first ever murder, influence his behaviour throughout the book.

Alex Morrow, a detective based in Glasgow, is involved in a surveillance case, following someone called Roxanna. She is somehow involved in possible drug related activities/money laundering. But Roxanna disappears and the police don’t know where she has gone. One of her kids rings in anonymously to alert the police, and after confirming that it was one of the kids (through CCTV), this allows them to follow up her disappearance officially. But no one seems to know where she’s gone.

Boyd Fraser runs an organic, local farmer’s market café in Helensburgh. A woman called Susan Grierson turns up. Long years ago, Susan was Boyd’s Akela in the Scouts, and his first ever sailing instructor. She has been living in the USA for the last twenty years, and is just back following her mother’s death, to sort out her house.

These three strands set the scene for the story to unfold; the criminal suffering from a conscience, the unhappy and bored café owner, and Morrow’s drugs investigation. Sooner or later, all three storylines link up and as usual, Denise Mina cleverly weaves the three strands together. There is an insightful look into police politics and how they influence their investigation, the ‘dos and don'ts’, and the consequences of receiving rewards and attribution for catching criminals also wanted elsewhere. The real villain is right under everyone’s noses the whole time without anyone suspecting, and there is a satisfying conclusion to the story once the drama has played out. This is a full-fat story with plenty of plot, character development, insight and local colour. Beautifully written, lovely to read and highly recommended.