To celebrate the publication on Thursday of the new "Lisbeth Salander" book, The Girl in the Spider's Web by David Lagercrantz translated by George Goulding, I have been reposting Maxine's reviews of the original trilogy by Stieg Larsson translated by Reg Keeland, concluding today with: 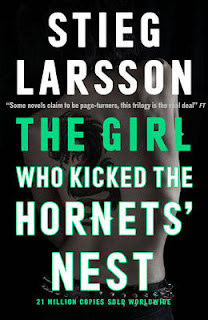 The long-awaited final part of Stieg Larsson's Millennium Trilogy reaches an English-language readership in 2009, five years after its first publication in Sweden. And it is certainly worth the wait. The story of Lisbeth Salander and Mikael Blomkvist (after earlier hints, here explicitly adult versions of Astrid Lindgren's children's characters Pippi Longstocking and Kalle Blomqvist), pulls you right in on page 1, and is terrifically difficult to leave behind on page 600, especially as so many aspects of their stories (particularly Lisbeth's) have not begun to be explored - and never will be, owning to the sad early death of the author.

THE GIRL WHO KICKED THE HORNETS' NEST begins directly after the dramatic finale of THE GIRL WHO PLAYED WITH FIRE, the first 100 pages reflecting the confusion of deaths, illnesses, attacks and conspiracy that culminated in the confrontations at Gosseberga. Most of these 100 pages take place in hospital where Lisbeth lies critically injured, where Zalachenko, her father, is also severely wounded, and where the police, security personnel and other vultures are circling round the pair. Anyone who has not read the previous two books will probably find this long introduction almost incomprehensible in its details - those who have read the predecessors will need good memories but will have no difficulty being drawn into Lisbeth's predicament as she lies paralysed in the knowledge that her father, lying in a nearby room down the corridor, is trying to finish his malign task - while other forces are keen to try her, label her as insane and send her back to the secure institution where she spent her unhappy adolescence - assuming she survives her terrible injuries.

Next, the canvas of the book expands to a compelling history of Swedish politics post-1964, consciously continuing from the social analysis of the Maj Sjowall/Per Wahloo Martin Beck series, charting the failures of Swedish democracy from within the security forces by the formation of the SSA, an unofficial secret police within the official secret police (Sapo), known only to one or two people in the country. Real and fictitious events and characters are seamlessly juxtaposed, though there's an essential brief glossary to help the non-Swedish reader grasp the non-fictional essentials.

In this novel, SSA consists of a small, secret core of very hard-liners, determined to uphold and protect what its members consider to be the country's best interests. Primarily, it seems, this task has consisted of containing Zalachenko, the most important Soviet defector to the West ever. The grey men of the SSA have created a new identity for him and over the years have given him free rein and protected him from the consequences of his criminal activities and gross abuse of his wife.

This army of old men from another time come together in the realization that the Zalachenko affair is likely to blow wide open once he and his daughter Lisbeth are able to communicate with the authorities. Although they have lost one of their main means of controlling Lisbeth (how she disposed of her guardian is part of the plot of book 2), they enlist the help of psychiatrist Peter Taleborian, the man who locked Lisbeth away after her pyrotechnic actions when aged 12, and whom she has good reason to hate. Only Dr Jonasson, the surgeon who is currently caring for Lisbeth, seems to stand between her and the strong forces who want her silenced.

The book bursts into real life after this long prologue, history and setting-of-scene, when an odd coalition including Mikael, Lisbeth and her hackers' group form the online ‘knights of the idiotic table' in their first real act of striking back. Mikael begins to dig into the story of Zalachencko, gradually becoming to suspect the existence of ‘The Section', as he calls what the reader knows to be SSA. When a crucial report is stolen from his apartment, he uses this circumstance to find out more than the perpetrators had bargained for, and to strike back at them, in a clever game of double bluff.

In THE GIRL WHO KICKED THE HORNETS' NEST, Lisbeth (who until the final chapters is a relatively insubstantial figure in the novel) serves as an allegory for Sweden itself - both the woman and the country have been betrayed over many years by secret allegiances of people bound together by delusions and evil impulses. Just as the young Lisbeth is wrongly diagnosed with mental illness and incarcerated in an isolation cell, so the young Swedish democracy is betrayed by people whose actions can only be explained by Mikael as being like those who have a mental illness and have separated themselves from normal society (p 475). Mikael is as much driven by his journalistic, crusading need to expose political corruption as his friendship and gratitude to Lisbeth compel him to expose the corruption that is continuing to threaten her by this coalition of "men who hate women".

Yet the novel is not a mere spy thriller - what gives it such massive heart are the characters - Mikael, Erica, the Millennium journalists, the Armansky operation, the police, Sapo agents, asylum seekers and others who give the novel such life - and the immense amount of absorbing, authentic details - of the workings of a newspaper office, a secret police organisation, computer hacking, police operations, investigative journalism, the security business, the race to publish Mikael's discoveries, and far more than can be covered in this review - a rich, dense and compelling context for the gradual uncovering of Lisbeth's story, cumulating in her trial where the main players take turns on centre stage.

There are certainly gaps in this book. One glaring weakness is that we never know why Zalachenko was so useful to the SSA, and why he continued to be so uniquely valuable for so long after he defected. We learn little of his criminal empire. Lisbeth, the very core of the trilogy, plays a passive role for almost all of the book. Some plot lines, for example the police search for the cop-killer Niedermann, are never developed. Other stories are hinted at but never told - we can only imagine that the author intended to pick those up in future books.

The Millennium Trilogy is a fantastically exciting and original set of books, admittedly with flaws, but with a great breadth and intelligence - of the characters as well as of the story - and with an ability to draw the reader in to an exciting narrative so that one is lost in the book, not knowing whether to turn the pages rapidly to find out what happens next, or to turn them slowly to prolong the totally mesmerising read, so ably conveyed to English readers by the translator, Reg Keeland.