The longlist for the The McIlvanney Prize for the best Scottish Crime book of the year has been announced:

Also announced is the shortlist for the Scottish Crime Debut of the Year: 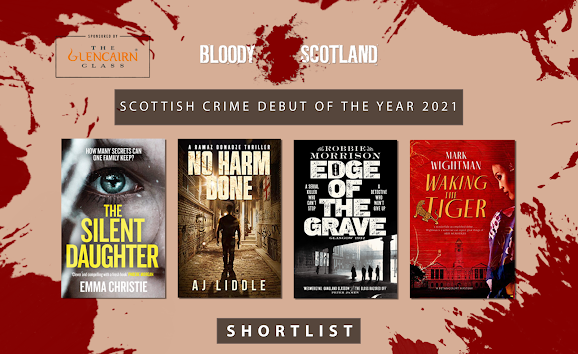 Bloody Scotland 2021 is scheduled for 17-19 September, keep up to date via their website.

The shortlist for the 2021 Theakston Old Peculier Crime Novel of the Year has been announced and you can cast your vote here. (The longlist is here.) Congratulations to all the nominees.

The 2021 Harrogate Crime Writing Festival programme has been announced and Rover tickets can be booked from today. Go to the HCWF website for more details and there is a FAQ on how the event will be managed to be COVID safe. 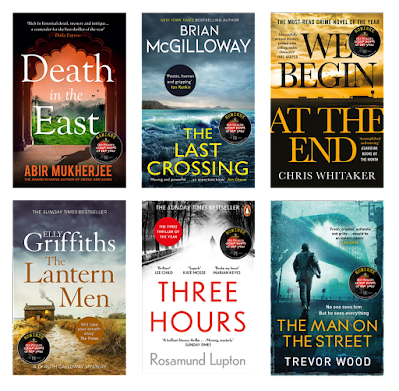 Here are the winners of the CrimeFest Awards 2021.
From the Press Release:

CRIMEFEST, one of Europe’s leading crime writing conventions, has announced the winners of its annual awards.

Now in its 14th year, the awards honour the best crime books released in 2020 in the UK.

Trevor Wood receives a £1,000 prize for the CRIMEFEST Specsavers Debut Crime Novel Award for The Man in the Street. Trevor Wood served in the Royal Navy for 16 years. The Man on the Street is set in his home city Newcastle, featuring a homeless veteran grappling with PTSD, dubbed by Lee Child as ‘an instant classic’.

Specsavers co-founder, Dame Mary Perkins, said: “Many congratulations to Trevor who really captured the city of Newcastle wonderfully in his book and let’s hope there’s more to come from this up-and-coming author. We don’t need research to tell us that more people have taken to reading in these last 15 months than ever before – with stories to take them out of their lockdowns and isolation – so we were delighted once again to sponsor this award.”

The £1,000 prize for the CRIMEFEST Audible Sounds of Crime Award, sponsored by Audible, and voted for by Audible subscribers goes to Richard Osman and the actress Lesley Manville who read The Thursday Murder Club. Osman has ruled the bestseller lists with his smash-hit debut crime novel.

The CRIMEFEST H.R.F Keating Award for the best biographical or critical book in the genre goes to Martin Edwards, editor of Howdunit: A Masterclass in Crime Writing by Members of the Detection Club, which has also been nominated for the 2021 Edgar Allen Poe Award.

As well as a prolific novelist, Martin Edwards is a renowned editor, reviewer, columnist and versatile writer of non-fiction, and is a leading authority on crime fiction; he received the CWA Diamond Dagger in 2020

The CRIMEFEST Last Laugh Award goes to Carl Hiaasen for Squeeze Me, a novel that captures the Trump era with Hiaasen's inimitable savage humour and eccentric characters.

The CRIMEFEST eDunnit Award for best e-book sees Ian Rankin take the title with A Song for the Dark Times, beating fellow giants of the genre, Michael Connelly and James Lee Burke.

The Publishers Association latest figures show fiction sales soared by 16% in 2020, with audiobook sales climbing by more than a third, as readers locked down escaped into books. The crime genre has led the rise in book sales and reading during the pandemic. Richard Osman’s The Thursday Murder Club is one of the key titles being cited as one of the key drivers.

Laurence Howell, Vice President, Content at Audible, said: “Congratulations to Richard Osman for the Audible Sounds of Crime Award. Audiobooks have been a great comfort to many over the past year, because of their intimate, immersive nature and the crime and mystery genre has been incredibly popular.”

CRIMEFEST Best Crime Novel for Children, aged 8-12, goes to Serena Patel for Anisha, Accidental Detective, which has already garnered plaudits, including the Sainsbury’s Children’s Book Award for Fiction, and is shortlisted for the British Book Awards Children fiction Book of the Year 2021.

CRIMEFEST Best Crime Novel for Young Adults, aged 12-16, goes to the multi-award-winning author Patrice Lawrence, who won the CRIMEFEST award in 2018 for Indigo Donut. This year her book Eight Pieces of Silva, an addictive tale of a teenager’s hunt for her missing sister, takes the top prize.

Adrian Muller, Co-host of CRIMEFEST, said: “A huge congratulations to all CRIMEFEST award winners this year. We had to cancel the last two physical conventions due to the pandemic, so it’s a real pleasure to be able to continue CRIMEFEST’s annual awards, albeit virtually. We are thankful to both Specsavers and to Audible for their on-going support.”

CRIMEFEST has had to postpone its 2020 and 2021 conventions, due to Covid restrictions. Hosted in Bristol, it is one of the biggest crime fiction events in Europe, and one of the most popular dates in the international crime fiction calendar, with circa 60 panel events and 150 authors over four days. Tentative dates for next year's Bristol CRIMEFEST are 12-15 May, 2022.

In light of Covid-19, the 2021 winners were announced online with an awards ceremony, hosted by Agatha Raisin co-star Matt McCooey, who plays Inspector Bill Wong in the hit series. The ceremony is available on the website www.crimefest.com and via its social media pages, from midnight on Tuesday, 1 June.

Leading British crime fiction reviewers and reviewers of fiction for children and young adults form the CRIMEFEST judging panels, aside from Audible Sounds, where Audible listeners establish the shortlist and the winning title.

CRIMEFEST was created following the hugely successful one-off visit to Bristol in 2006 of the American Left Coast Crime convention. It was established in 2008. It follows the egalitarian format of most US conventions, making it open to all commercially published authors and readers alike.

Eva Bjorg Aegisdottir for The Creak on the Stairs (Orenda Books)

Robin Morgan-Bentley for The Wreckage (Trapeze)

Trevor Wood for The Man on the Street (Quercus)

Lee and Andrew Child for The Sentinel, read by Jeff Harding (Transworld)

TM Logan for The Catch read by Philip Stevens (Zaffre)

Mark Aldridge for Agatha Christie’s Poirot: The Greatest Detective in the World (HarperCollins)

Martin Edwards (editor) for Howdunit: A Masterclass in Crime Writing by Members of the Detection Club (Collins Crime Club)

Peter Temple for The Red Hand: Stories, reflections and the last appearance of Jack Irish (riverrun)

Christopher Fowler for Bryant & May - Oranges and Lemons (Doubleday)

Gabriel Bergmoser for The Hunted (Faber)

Sharon  Bolton for The Split (Trapeze)

Ian Rankin for A Song for the Dark Times (Orion Fiction)

Jack Noel for My Headteacher is an Evil Genius (Walker Books)

Here's a snapshot of what I think is published for the first time in June 2021 (and is usually a UK date but occasionally will be a US or Australian date). June and future months (and years) can be found on the Future Releases page. If I've missed anything or got the date wrong, do please leave a comment.