Review: The Samaritan by Mason Cross 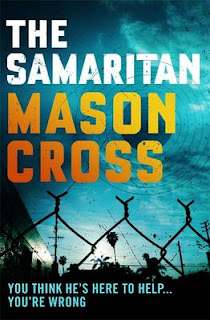 When the mutilated body of a young woman is discovered in the Santa Monica Mountains, LAPD Detective Jessica Allen knows this isn't the work of a first-time killer. She's seen this MO before - two and a half years ago on the other side of the country. Allen begins to dig deeper and soon uncovers a terrifying truth. A sadistic serial killer has been operating undetected for the past decade, preying on lone female drivers who have broken down. The press dub the killer 'the Samaritan', but with no leads and a killer who leaves no traces, the police investigation quickly grinds to a halt.
That's when Carter Blake shows up to volunteer his services. He's a skilled manhunter with an uncanny ability to predict the Samaritan's next moves. At first, Allen and her colleagues are suspicious. After all, their new ally shares some uncomfortable similarities to the man they're tracking. But as the Samaritan takes his slaughter to the next level, Blake is forced to reveal that the similarities between the two men are closer than even Allen suspects.
With time running out and an opponent who knows all of his tricks, Blake must find a way to stop the Samaritan . . . even if it means bringing his own past crashing down on top of him.

THE SAMARITAN is a very powerful and literate thriller set in California, written by a very talented new author from Glasgow. This is the second book by this author with Carter Blake as principal protagonist. Carter Blake is a strange but friendly loner who has extraordinary abilities that he appears to have learned doing CIA black ops but which he is very unforthcoming about.

Blake heard about the problems that "The Samaritan" is causing on the TV news before he arrived in Los Angeles and so could not be the killer himself as some suppose. Blake first appeared in the author's debut book THE KILLING SEASON when he helped FBI agent Elaine Banner catch a serial killer named Caleb Wardell otherwise known as "The Chicago Sniper" and thus Banner is well disposed to give him a good reference when asked by LAPD Detective Jessica Allen about this man she is so unsure about trusting.

The murders of young women, killed when their vehicle breaks down reaches a high number and the public are very worried about their personal safety in the US where ownership of a car is so important as the distances of travel are so much greater than here.

The book was very atmospheric and deftly plotted. All the characters are very richly drawn and the author writes the book seeing the story from different viewpoints (e.g. Allen, the detective, or Carter Blake or even The Samaritan which makes for some compelling reading). There are a few red herrings to draw the reader to the wrong conclusion before the very exciting last page.

I was fascinated by the story and once started I just could not put it down. This author who has only published one other book so far, writes with such dexterity and expert plotting that one would think he has many, many titles to his credit. I must try and get hold of his earlier book as I don't think I can wait until next year to read more about Carter Blake. Extremely well recommended.