Review: The Root of All Evil by Roberto Costantini tr. N S Thompson 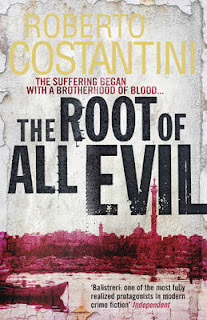 “A brotherhood of sand and blood. For ever.”

Tripoli, 1962.
Gazing up at his grandfather's face in the darkness of the cinema, Michele asks about the gunfight on the screen. Grandfather Buseghin doesn't answer, he doesn't like gunfights – not since his son Toni, dressed in his new fascist uniform, was killed during the war.
The Buseghin-Balestreri family live ten kilometres outside Tripoli, in the villa built by Grandfather near his olive grove. Grandfather's daughter Italia, Michele’s mother, idolises both her dead brother and Mussolini: she spends her days smoking and reading Nietzsche, a glass of whisky by her side – much to husband Salvatore's disgust. Grandfather built a second villa next door and this is let to the Hunts, an American family. William Hunt works out of the nearby US base; his wife Marlene, beautiful and with ambitions to be in films before she met and married William, jogs. Their daughter Laura is two years younger than Michele and Michele loves her.
Two kilometres away Michele's best friends Ahmed and Karim live with their father Mohammed, sister Nadia, Mohammed's two wives and their two half-brothers. All are crammed into a wooden shack close to the olive grove and the stinking cesspit.

Home from the cinema trip, Michele straddles the villa's verandah railings waiting for his customary gunfight with Ahmed. Michele has a new twist, his own mock death; he has learned from the film that girls love a dead martyr. Laura takes some time studying Michele lying in the dust. “Bravo Mikey,” she says, “The winner always turns out to be hateful.”
Sunday: Michele and his brother Alberto enjoy an “American breakfast” at the Hunts after which Marlene invites them for a ride to the beach in her new Ferrari. Later a game of football with Ahmed and Karim and – after sunset – shooting doves whilst Ahmed skewers scorpions with his throwing knife. At the villa Michele's dog Jet is being examined by the vet; rabies, he will have to be put down. Michele, with his air gun, goes out to where the local feral dogs whine and howl but Ahmed is already there. He cuts the throat of the largest dog.
Monday: Michele tries to forestall his friend Nico's humiliation during “reading aloud” at school. The son of the local garage man, Nico smells of petrol, is the butt of the class's jokes and lisps. Their teacher, local parish priest Don Eugenio, knows that Michele, the son of the powerful Salvatore Balistreri is untouchable, so he punishes Nico instead, pulling his ear savagely and keeping them both back after class. He dismisses Michele and Nico's eyes plead as Michele leaves. That evening the quartet of friends, Michele, Ahmed, Karim and Nico, swear blood brotherhood and come up with a plan to protect Nico. They hide, camera ready, when the priest hears Nico's confession next day as arranged. Nico confesses that the four touched themselves. The priest kneels and demands that Nico demonstrate and when Nico drops his pants the boys jump out, photographing the surprised priest. We won't tell, they say, but we have photographs. Ahmed adds, “Touch my friend again and I'll slit your throat.” …

Roberto Costantini's THE ROOT OF ALL EVIL is the second part of his Commissioner Balistreri trilogy and covers two time periods: Michele Balistreri's youth in Libya during the 1960s, his family life, his relationship with friends Ahmed, Karim and Nico, the Arab-Israeli war of 1967 and the quartet's burgeoning criminal career. This part culminates in the brutal murder of Ahmed's sister Nadia, Gaddafi's coup and the expulsion of the Italian community. The second part is set in 1980s Rome with Balistreri a police commissioner. The rape and murder of a young South American student only 24 hours after her arrival in the city recalls the murder of Nadia for Balistreri. He becomes obsessed with the case, whilst at the same time committing to watching out for the daughter of his old boss as she enters the corrupt world of Italian TV. Once again Balistreri's past will surface to haunt him.

Costantini's writing, as presented in this translation by N S Thompson, is detailed but clear and action-based although things speed up in the final police procedural section. Balistreri, an egotistical misogynist and ex-Fascist, is an unlikeable hero but as Costantini himself says: “The truth does not necessarily come out of good people.” Costantini is an ex-engineer so thoroughness of structure is perhaps no surprise. He does not so much peel back the layers of an historical onion, as construct the entire onion before our very eyes. (“My wife was very upset because the house was full of flow charts,” he says of his preparation for the first part of the trilogy, THE DELIVERANCE OF EVIL.) Like Balistreri, Costantini was born in Libya. When asked in a Crime Thriller Fella interview why he set part of his novel there, Costantini replied that the events surrounding Gaddafi's rise to power were:
“fascinating, but are still not widely documented; and because Libya is a perfect example of a place wherein the values of the old world (loyalty and trust) were replaced in favour of the values of the new world (making a lot of money very quickly)”.
Perfect roots for a crime novel. Although part of a trilogy, this book works very well as a standalone novel. If you have a passion for modern political and social history told through exciting crime fiction, this is one for you. I certainly plan to revisit Costantini's writing.