US Cozy Review: Guidebook to Murder by Lynn Cahoon

Regular readers might know that I enjoy an occasional US cozy to break up my Euro Crime reads and my wandering mouse has meant that I've downloaded several US cozies from Netgalley. I thought, therefore, I would introduce a new but infrequent slot for US Cozy reviews. 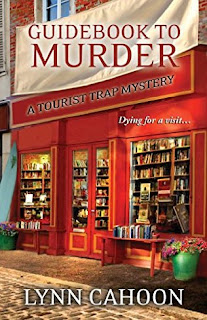 GUIDEBOOK TO MURDER is the first in the 'Tourist Trap' mystery series, with the fifth out this month (August 2015).

Five years ago, Jill Gardner, a family lawyer, moved from the big city to the small coastal Californian town of South Cove to own and runs the coffee/book-shop, Coffee, Books, and More. One of Jill's friends, the elderly Miss Emily, owns a rundown house which the Council feels is an eyesore and are continually on her to mow the lawn, fix the fence etc. It seems the council has had enough and have hired an outside lawyer firm to serve Miss Emily with a condemnation order.

When Jill goes to visit, she is horrified to find Miss Emily, dead in her bed. Convinced that this is not a natural death she swears to find the murderer. The police, in the shape of hunky Detective Greg King are not so sure that the death is suspicious.

When Jill is named heir, things get even more complicated. Jill moves into her friend’s house and has thirty days to get it up to code. She hadn't bargained on death threats, vandalism, lost heirs and disappearances to slow her down. The only positive note is that Det. Greg is spending a lot of time with her, though she knows he is off limits as one of her building contractors said he was the best man at Greg's wedding…

Though Jill says she will investigate, she doesn't actually do that much. The pace of GUIDEBOOK TO MURDER is leisurely with much time devoted to painting and refurbishing of her new home. There are several side-plots involving stolen paintings, gold coins and her ageing aunt who comes to help out/take-over the shop but it never feels that urgent and disappointingly (to me) very little of the book is set in the book-shop. On the plus side is the time afforded to the reader to get to know Jill and also her will-they won't-they romance with Greg. As this is the first book, I feel that the scene has been set and its players introduced and I'm hoping that in the next book there will be a tighter mystery and less time spent in the equivalents to Home Depot.