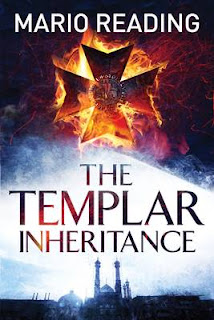 1198: On the eve of his execution, Bavarian knight Johannes von Hartelius writes a last confession. His parchment conceals the location of the Copper Scroll, said to hold the secret of Solomon’s treasure, and the key to the building of a new Temple in the Holy Land. Years before that, Hartelius attempted to rescue the Holy Roman Emperor, Frederick Barbarossa, from drowning in a river during a battle. Although now a disgraced Templar knight, Hartelius is still a guardian of the Holy Lance and does not want the Scroll to be sold to finance a Fourth Crusade.

May 2013: In present-day Iraq, British photo-journalist John Hart survives a bomb explosion near a roadside café. He’s accompanied only by Nalan Abuna, his intelligent beautiful Kurdish Christian translator. They are shaken and terrified for different reasons but this event will lead them both to uncover shocking brutal stories, firmly set in the modern history of the area.

At the same time Hart also discovers the message hidden in his ancestor’s testament, placed in the Holy Spear. The famous treasure appears to be concealed in a hollow mountain, known as Solomon’s Prison. Hart, besotted with Nalan, becomes obsessed about getting to Iran where the mountain is located. With Nalan’s help he sets out to find the Copper Scroll, following in Hartelius’ footsteps and his epic battle hundreds of years ago, and his life changes dramatically. What follows is a dangerous adventure where past and present are interwoven, and the finale is utterly unexpected.

Similarities between Hart and Hartelius are plentiful. True love features strongly in their lives, along with the desire for truth and honesty. Both are heroes in a way…

There are vivid descriptions of torture and humiliation in the present times. I assume that style might have been chosen as a way to engage the reader more in the story, and its political context, and also to demonstrate the differences between two separate modern worlds: that of the quite naïve idealistic Hart and that of the disillusioned, older-than-her-years Nalan.

THE TEMPLAR INHERITANCE is an intense fast paced thriller in the 'Dan Brown' tradition. Mario Reading uses short chapters, each ending with a little cliff-hanger which encourages the reader to keep reading and wanting to know more; his preference is for firmly defined characters and the historical background that might not always be accurate but provides an interesting setting for this plot-driven novel.

Another excellent perceptive review from Ewa Sherman. She can really capture the essence of a novel.