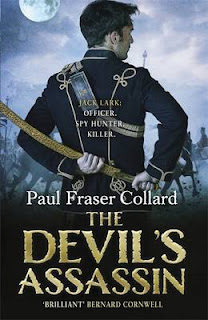 Bombay, 1857. Jack Lark is living precariously as an officer when his heroic but fraudulent past is discovered by the Devil - Major Ballard, the army's intelligence officer. Ballard is gathering a web of information to defend the British Empire, and he needs a man like Jack on his side. Not far away, in Persia, the Shah is moving against British territory and, with the Russians whispering in his ear, seeks to conquer the crucial city of Herat. The Empire's strength is under threat and the army must fight back.

As the British march to war, Jack learns that secrets crucial to the campaign's success are leaking into their enemies' hands. Ballard has brought him to the battlefield to end a spy's deceit. But who is the traitor?

THE DEVIL'S ASSASSIN sweeps Jack Lark through a thrilling tale of explosive action as the British face the Persian army in the inky darkness of the desert night.

The descriptions of battles with the hand to hand combat involving Jack and his fellow soldiers are truly incredible but apparently based on fact. This book is really extraordinary, the author's research, and the descriptions of life in the military and the Indian campaigns, is first rate and I was not surprised that the author indicated that he was influenced by reading the "Sharpe" books of Bernard Cornwell and the "Flashman Papers" of George McDonald Fraser in his youth.

I was very impressed by the deep historical research that this author has made in order to present a story that is truly compelling as this one is. You do not need to have read the previous two books in this series as the author fully explains Jack's present situation and what he needs to do to extricate himself from his desperate situation! The book comes with a map of nineteenth century Persia and also thoughtfully provides a detailed glossary of some unusual words that are used in the text. I have not read any of this author's previous books but I will certainly look out for the future adventures of Jack Lark. This is one of the best historical mysteries that I have read so far this year. Well recommended.