Please find below, the press release detailing the shortlists for this year's CWA Dagger Awards. I have highlighted the authors' in translation and details of the Awards ceremony.

A debut novel is up against one of Britain’s biggest and most celebrated authors for the crime novel of the year.

The 2021 shortlists for the prestigious CWA Dagger awards, which honour the very best in the crime writing genre, have been announced.

The world-famous Crime Writers’ Association (CWA) Daggers are the oldest awards in the genre, and have been synonymous with quality crime writing for over half a century.

Past winners of the CWA Gold Dagger, which is awarded for the crime novel of the year, include John le Carré, Reginald Hill and Ruth Rendell.

This year’s shortlist sees City of Ghosts by Ben Creed, praised as a ‘brilliantly orchestrated and totally engrossing’ debut thriller by the CWA judges, up against Robert Galbraith’s Troubled Blood, hailed as a ‘magnificent multi-layered epic’.

Heating up the shortlist is Chris Whitaker, who took home the John Creasey (New Blood) Dagger in 2017 with his debut, Tall Oaks. His latest novel, We Begin at The End is not only up for the Ian Fleming Steel but also the Gold Dagger. Praised as ‘truly memorable’ by the CWA judges, We Begin at The End has been a Waterstones Thriller of the Month and sold in 17 territories, with screen rights snapped up by Disney.

Maxim Jakubowski, Chair of the Crime Writers’ Association, said: “The Dagger shortlists again highlight the wealth of great books and diversity within the crime genre. With terrific new titles from authors both familiar and new, including some books impressively nominated in more than a single category, the presence on the Publisher Dagger shortlist of long-standing traditional publishing houses and smaller independents and even, on the Dagger in the Library (voted on by librarians throughout the country), a first, with a self-published writer rubbing shoulders with established veterans. The Daggers are assuredly the best and most prestigious reflection of what's happening on the crime and mystery writing front.”

Set against the bleakness, terror and depravity of Stalin’s 1950s Leningrad, City of Ghosts by Ben Creed returns for the much-anticipated CWA John Creasey (New Blood) Dagger, awarded to the best debut novel. Ben Creed is the pseudonym for an author duo who met on a writing course, Barney Thompson a classically trained musician and fluent Russian speaker, and Chris Rickaby, formerly an advertising copywriter.

The ALCS Gold Dagger for Non-Fiction sees the forensic pathologist Sue Black’s reflections, Written in Bone on the shortlist, praised by the CWA judges as a ‘humane, wise book’. She’s up against Andrew Harding’s These Are Not Gentle People, a beautifully written investigation into dark and murderous events in a rural South African community, dubbed by Alexander McCall Smith as a masterpiece.

The Crime Fiction in Translation Dagger shortlist features the Swedish writer Mikael Niemi with his sumptuous blend of historical fact with fictional intrigue, To Cook a Bear, translated by Deborah Bragan-Turner. From one of Israel’s most beloved writers is Three by D A Mishani, translated by Jessica Cohen, and from South Korea is Yun Ko-eun’s original and inventive thriller The Disaster Tourist translated by Lizzie Buehler.

The CWA Daggers are one of the few high-profile awards that honour the short story. The shortlist features the Sunday Times bestseller, Clare Mackintosh, and the founding member of the North East Noir crime writers’ group, Robert Scragg.

The Dagger in the Library is voted on exclusively by librarians, chosen for the author’s body of work and support of libraries. This year sees C L Taylor, Peter May, Lisa Jewell, James Oswald, Denise Mina and L J Ross on the shortlist.

The Best Crime and Mystery Publisher of the Year Dagger celebrates publishers and imprints demonstrating excellence and diversity in crime writing. Among the shortlist, the esteemed Faber & Faber vies against the independent publisher, No Exit Press.

The winners will be announced at Daggers Live!, the online CWA Dagger awards ceremony on 1 July at 7.30pm. Barry Forshaw will be Master of Ceremonies and Abir Mukherjee is the guest speaker.

The 2021 Diamond Dagger for lifetime achievement, the highest honour in British crime writing, has already been announced, awarded to Martina Cole. She will also feature in the Daggers Live! event.

Chris Whitaker: We Begin at the End (Zaffre, Bonnier)

Ruth Ware: One by One (Vintage, Harvill Secker)

Egan Hughes: The One That Got Away (Sphere, Little, Brown Book Group)

Andrew Harding: These Are Not Gentle People (MacLehose Press, Quercus)

Robert Scragg: ‘A Dog Is for Life, Not Just for Christmas’ in Afraid of the Christmas Lights, edited by Miranda Jewess (Criminal Minds Group)

(Competition for an unpublished novel)

CWA DAGGER IN THE LIBRARY

The longlist for the 2021 Theakston Old Peculier Crime Novel of the Year has been announced and you can cast your vote on the website. 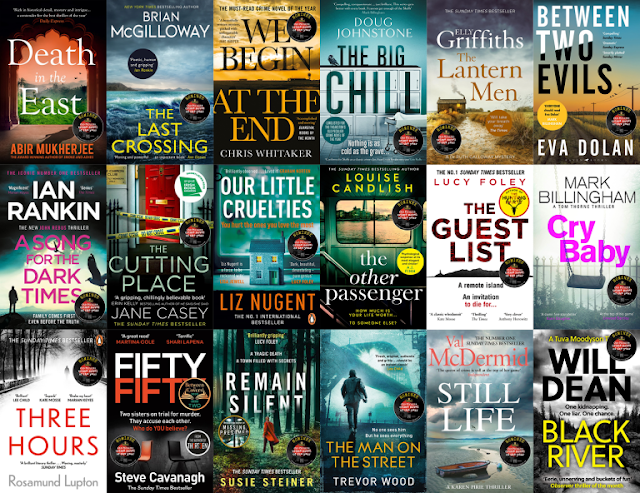 Here's a snapshot of what I think is published for the first time in May 2021 (and is usually a UK date but occasionally will be a US or Australian date). May and future months (and years) can be found on the Future Releases page. If I've missed anything or got the date wrong, do please leave a comment.