Welcome to another entry in my irregular feature: US cozy review. Again, this is the start of a new series, and it features a likeable lead who has the job of "chocolate whisperer"! 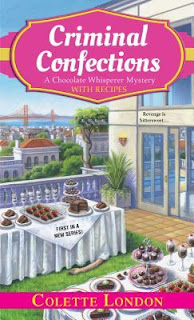 CRIMINAL CONFECTIONS is the first in the series and introduces Hayden Mundy Moore, chocolatier aka the chocolate whisperer. Hayden is a troubleshooter, who is hired discreetly to fix problems with products. She is employed all over the world and has inherited a fortune from an uncle – however there are conditions attached to that wealth – including, it seems, not settling down. Her latest assignment brings her to Lemaitre Chocolates at San Francisco. Lemaitre are hosting a long-weekend event at their flagship hotel and Hayden is invited with the proviso that she finishes her report.

Hayden invites a plus-one – Danny – a long-time friend who has a shady past and now specialises in security matters. This turns out to be a fortunate career profession for Hayden as she soon needs his services.

The apparently accidental death of a Lemaitre employee seems to Hayden to be more likely a murder and possibly she, Hayden, was the intended target. Unable to feel safe until she gets to the bottom of the death she begins to investigate. There are several candidates for the role of killer, including the current CEO and the deposed CEO of Lemaitre, a jealous wife, and a business rival.

Fortunately for Hayden she has Danny to help her and on the end of the phone is Travis, her accountant and owner of a very sexy voice, that she hasn't met yet.

I enjoyed CRIMINAL CONFECTIONS with its independent and talented female lead, though it has to be said she's perhaps not the greatest detective. I guessed correctly whodunnit before she did. The mystery element is possibly the weakest bit as the police are absent until the very end and Hayden steals some of what should have been evidence and ships it to Travis for testing. However the information about chocolate is fascinating – the many ways it can be used – not just for food but for example, in the spa as a hot cocoa mud bath. You will want to eat/buy chocolate after/during reading this book. Most importantly, I liked the narration style, which is as if she's speaking to you, similar to Laura Levine's Jaine Austen series and of course there's the mysterious Travis to meet in due course I hope...

I'll be carrying on with this series and the second book, DANGEROUSLY DARK, is published on 29 September.