To celebrate the publication on Thursday of the new "Lisbeth Salander" book, The Girl in the Spider's Web by David Lagercrantz translated by George Goulding, I am reposting Maxine's reviews of the original trilogy by Stieg Larsson translated by Reg Keeland, continuing today with: 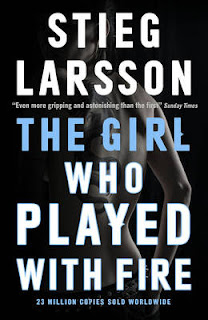 This long book is the second in the Millennium Trilogy, the first of which, THE GIRL WITH THE DRAGON TATTOO, introduced the reader to Lisbeth Salander and Mikael Blomkvist, a campaigning journalist. It is a very exciting read, and I'm eager to read the final volume.

THE GIRL WHO PLAYED WITH FIRE is in some senses two books. The first 200 pages is an extensive prologue telling the story of Lisbeth, previously a tantalisingly insubstantial figure: we learn quite a lot of her back-story, as some of the previous hints about her past are filled in (including a rather gruesome prologue chapter). At the same time, we learn that she has been travelling the world since the end of the first book, arriving in Grenada at the start of this one, where she has a brief affair, witnesses an attempted murder during a freak tornado, and sets out to solve Fermat's last theorem without the aid of a computer program. The rest of the book - in itself a hefty 400 pages, shifts to Sweden and ignores most of the Grenadan events. Perhaps some of them will be picked up in book three. Otherwise, I'm not sure of their point.

What follows is mostly a straight police procedural, at the same time revealing more of Lisbeth's history. Soon after she returns to Stockholm and sets herself up in an apartment that is off the official radar, three brutal murders occur on one night. Lisbeth, the only apparent link between all the victims, is the prime suspect and becomes the focus of a national police hunt. She has suffered terribly in her life - the reader by now knows some, but not all, of this background - and her treatment by the media is a horrible, insensitive parallel of her earlier abuse by those who should have cared for her - teachers, doctors, guardians and 'friends'. Lisbeth becomes a fugitive, yet refuses to be victimised by her ordeal. She is not only determined to find out the identity of the killer(s), but also, as she becomes more aware of how the crimes are linked to her, goes onto the attack to deal with the situation on her own. She has long since learned not to trust institutions such as the police and the law.

In parallel with Lisbeth's story, Blomkvist, publisher of Millennium magazine, is also investigating the murders. Two of the victims were colleagues and friends of his, and he's convinced that their deaths are related to the work they were doing in uncovering a massive scandal of prostitution and drug trafficking between Russia, Eastern Europe and Sweden. Although Lisbeth has rejected him as a lover and will not contact him, Blomkvist is convinced that she is innocent. Therefore, in contrast to the police investigation, which is focused solely on finding Lisbeth and convicting her, he attempts to uncover other motives for the crime.

The book is packed with incident, thrills, characters, rich details and plot revelations. Because Stieg Larsson is juggling stories about Millennium (the publication and its journalists), the international sex trade, an investigation agency, evil bikers, and the police investigation, as well as Lisbeth's associates and past, which itself contains several strong and moving subplots, the pace never lets up, emotions are intense, and there are no boring moments as, in J K Rowling style, the author gradually reveals more of the intention of his triptych. However, there are plenty of flaws - too often, people remember a crucial fact that they'd forgotten previously (one such, Blomkvist's discovery in his kitchen that leads into the final section, is truly clunky - and this is not the only clumsy device used); Lisbeth can find out anything she wants via magic, that is her (unexplained) hacking skills and her international geeks' undercover network. People often see each other by coincidence (Blomkvist and Lisbeth spot each other several times before they communicate directly), and there are quite a few cliches in terms of criminal masterminds, spooks and an evil Russian thug who is huge and feels no pain.

There is also a strong element of male wish-fulfilment running through the book. Lisbeth is almost a Modesty Blaise-like figure at times, having her breasts enlarged, living off junk food yet remaining "anorexically thin" (as we are often reminded), and enjoying lusty sex with men and women. The Millennium journalists are similarly idealised, being portrayed as liberal-thinking, high on integrity and very highly sexed. On the other hand, most of the other men in the book are either decent enough yet bland (the police chief) or pure evil - rapists, abductors, child abusers and "men who hate women" to name but a few of the types in the pages. Most of these aspects add to the overall excitement, but they also create a slightly comic-book atmosphere.

Nevertheless, despite these flaws (some of which the author might have revised before publication had he lived) this book is truly powerful. The criminal investigation turns out to be directly related to the events in Lisbeth's horrific past, and the way in which old events are gradually revealed in order to explain how the crimes occurred is very cleverly done, with a stunning, emotionally draining climax.

Although there is a resolution of sorts, there are a great many loose ends. It remains to be seen whether the third book will address these, in particular the mystery of Lisbeth's sister as well as the wider issues of the corruption of the Swedish "special services" and of the sex/drug trade. As things stand, we are left on a cliffhanger, with little closure in the characters' life-stories or on the wider issues that were being addressed by two of the murdered people. A perfect recipe for a third, and final, instalment.

How lovely that you're doing this, Karen. Glad to see these again...