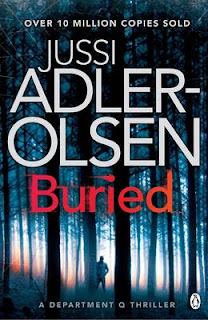 The long pre-amble to this book, builds up the background to the eventual crimes that Department Q is tasked with investigating. As part of a money laundering swindle, René Eriksen, a government official, is sending money to Africa, to help his friend Teis Snap, the head of Karrebæk Bank to prevent the bank from going under. Somehow, this is linked, at least in part with the local work of Louis Fon, who was working with the Baka pygmy tribe to protect their way of life in the Bantu region in Africa, but he is brutally murdered by Mbomo when he discovers that the money that should have been used to help them was actually being used to buy alcohol and drugs. As he lies dying, he manages to send a cryptic text from his mobile phone, which is received by William Stark, who works for René. William is sent out to investigate Fon’s disappearance, but while there, helped by Swedish man in a bar, he manages to decipher the text, which hints at the scandal. Stark immediately and unexpectedly returns to Denmark, but this was a dangerous move, and he hasn’t banked on the ruthlessness of Teis Snap, who engineers William’s disappearance.

Marco is a young, bright lad, who in a rather Dickensian way, works in a gang of children made up of pick-pocketers and beggars, which is controlled by his uncle Zola. He’s never been allowed to go to school, and the gang have travelled around Europe before ending up in Denmark, but he’s managed to teach himself quite a bit by reading books, and is one of the few in the gang that has managed to learn to speak Danish fairly well. Zola is a bully, and beats the children who don’t perform well on the streets. One night Marco overhears Zola planning to maim him, so that he can be an effective beggar and he decides to try to escape. And in doing so, he stumbles across Stark’s body.

Department Q, is made up of DI Carl Mørck, a Muslim sidekick called Assad, and they are supported by Rose, a strong, opinionated and difficult woman who nevertheless is extremely good at her job. Mørck is divorced from his wife Vigga, dating his psychologist Mona, and living in his house is Hardy, an ex-cop who is now a paraplegic, a lodger called Morten and his boyfriend Mika, and his difficult teenage son Jesper. Department Q is tasked with tackling unsolved cases, and eventually they almost stumble onto the case of the missing William Stark. Then, the plot follows the parallel stories of Marco, trying to keep hidden from Zola and his gang, as well as the police, with his knowledge of the fate of Stark that will eventually become important, alongside the investigations of Department Q.

The sarcasm, back-biting and apparent dysfunctionality of all three members of Department Q make for entertaining reading, though in reality they make a very good team, with complementary strengths that work well together to solve the crimes under investigation. And the desperate plight of Marco, and how he seems to have as many lives as a cat, as he escapes capture and harm, time and time again through his wits and intelligence, is well told and engaging. The Department Q stories are complex, well written, and never fail to disappoint, and this one is no exception. I thoroughly enjoyed it, and if you haven’t read these novels yet, it’s about time you did!