I thought I'd post my review straight into the blog so people can comment on it if they so wish. Phantom is published today in the UK. 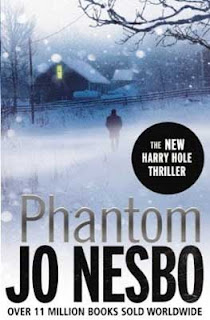 "My name's Harry and I come from Hong Kong. Where is she?"

The man arched an eyebrow. "The Harry?"

"Since it has been one of Norway's least trendy names for the last fifty years, we can probably assume it is."

After the serial killer books, THE SNOWMAN and THE LEOPARD, with their gruesome scenes of murder, comes PHANTOM a quieter book which returns to the more mundane but still devastating world of drugs. Oslo, in Harry Hole's world at least, has the most drug-deaths in a capital city in all of Europe. A new drug, less fatal but more addictive and pricey than heroin has swept over Oslo: "violin". One of the youngsters caught up in its strings is Oleg, to whom Harry was a father figure when Harry was with Rakel, Oleg's mother and the love of Harry's life.

The arrest of Oleg for the murder of Gusto, Oleg's best friend and partner in crime, is what brings Harry back from a three-year exile in Hong Kong. Harry has cleaned-up - off the booze and drugs - and looks well. Though he is no longer a policeman, it doesn't stop him setting out to discover who did kill Gusto. Harry has to unravel the current drug-scene to find out who the lads were working for, the so-called Phantom. A man whom no-one has seen, who's said to haunt Oslo at night. His investigation reveals police and local-government corruption and becomes increasingly more dangerous, with an escalation in the methods used to try and kill him and Harry's previously good health deteriorates in parallel.

Running alongside Harry's actions is a narrative told by the dying Gusto to the father he never knew and so the reader is privy to more information than Harry but is equally ignorant of who did shoot Gusto. This is probably the weakest part of PHANTOM as Gusto seems to live for quite a long time after his shooting, to tell his lengthy tale.

Whereas THE LEOPARD was about Harry being a son, PHANTOM has Harry in the role of father and he will do anything for Oleg and Rakel and gets help where he can. He even ropes in Oleg's upright solicitor for a bit of illegal grave-digging...

Familiar faces from THE LEOPARD reappear in the shape of fellow police officers Bellman and his sidekick "Beavis", and Beate Lonn provides forensic support to her old friend.

Though PHANTOM is quite a sombre read, set as it is against a backdrop of so many damaged young people and greedy criminals, it is not without Harry's trademark wit. The plotting is incredibly thorough, you know that anything that gets mentioned will have a use later and yet there are still clues that can be overlooked, such as a one line reference to a man which proves significant later, and there is a fantastic set-piece when Harry confronts the Phantom in his lair. Due to the compelling nature of Harry's character and life, PHANTOM is difficult to put down, though the last couple of chapters are, emotionally, quite difficult to read.

I've been a big fan of Harry Hole since reading THE REDBREAST in 2007 (and there is a circular link to that book in PHANTOM). PHANTOM deliberately leaves some significant loose ends and I really don't know where Harry's going to go from here, but I'll be there.

Here are Jo Nesbo's books in order.
Posted by Karen (Euro Crime) at 9:15 am

I daren't read any reviews until I've read the book- looking forward to it!

I've skimmed the review as I'm going to read it this weekend. I'm looking forward to it.

Prof P came home from work yesterday and told me that he'd read about a great new Scandinavian crime author in The Metro (free London newspaper) on the train. He couldn't remember the name of the author but he knew the detective was Harry HOLE (pronounced as in Hole). ;-) I mentioned that I have a copy of The Redbreast if he wants to get started. (again, given to me for my birthday last year by someone who knows I like crime fiction and who had seen some publicity about Jo N being "the" author to read from Scandinavia).

Very good review. I will put Phantom on my TBR list. This is a more compelling review than for some of Nesbo's, but I suppose I should read these in order -- although since publication is out of order, I'm never sure what the order is supposed to be.

Thanks Kathy, the correct order is here. The first book in the series has been titled Bat (in English) but I think it may change. Should come out in October.

ps Phantom is much more like the earlier books than the last two.

That's good to hear. I thought the more recent ones were a bit lacking. Seemed more horror than crime.

So Bat is coming out in October? I think it is great that we will finally get to read about the Australian story of Harry that is referred to numerous times in the other books. Thanks for an awesome review. Am looking forward to it.. have to read Redeemer onwards first.

I've only read Nemesis -- which I thought was one of the best thrillers I've ever read, unputdownable -- and Devil's Star, which was so-so.

I'm VERY pleased to know Nesbo is returning to his previous style. He can be such a good writer.

Phantom is amazingly written. The opening POV from the rat is not a one-off thing. It keeps coming back and everything is tied up at the end. Can't wait for the next installment....I hope.

More on any more HH books in the recent interview at Harrogate (http://eurocrime.blogspot.co.uk/2012/07/harrogate-jo-nesbo.html)

I've enjoyed reading J Nesbo's books and adore Harry Hole. He is such an enigmatic character I sincerely hope that he lives on. Her books leave me wanting more every time.
Stephanie

I thoroughly enjoyed Phantom and Jo Nesbo always leaves me wanting more. Harry Hole a great character and very enigmatic. I sincerely hope he lives on.

Leopark is the best Jo Nesbo-Harry Hole book so far! Could not put down the book until I finished it... Fantastic! Cannot wait for the next installment if there's one!