I was therefore very pleased to accept an invitation to receive and review each week's serialisation as it comes out. Part One was released 1 September and contains a prologue and the first 27 chapters plus some extra items relating to the case. 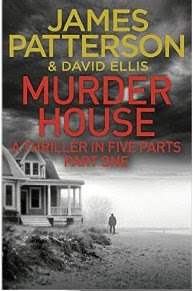 MURDER HOUSE is set in the Hamptons. It begins with a prologue set sixteen years before the main narrative, in which an unnamed child plays a frightening prank at school. The child also mentions the haunted house – 7 Ocean Drive.

Back to the present day and we meet Noah Walker, an odd job man, with Matthew McConaughey looks, who is having an affair with Paige, the third wife of a possessive and influential billionaire. The police burst in, heavily armed, and arrest Noah for the double murder of an aspiring actress and a Hollywood agent. The lead police officer in the arrest is Det. Jenna Murphy who has been hounded out of NYPD and given a job by her uncle, the Chief of Police, Langdon James. Jenna, however, is not on the case but that doesn't stop her paying a visit to the crime scene – 7 Ocean Drive, already known to the locals as the Murder House.

More deaths follow but this Part One, focusses on the case against Noah Walker. Is he a sadistic killer? Jenna thinks not then thinks yes. Is he being framed? Are the police setting him up? Jenna too has her own problems. Why did her family stop visiting the Hamptons when she was young? What is causing her blackouts? There is plenty more to know about Jenna over the next four parts. With Noah pleading his innocence and Jenna being a bright detective, you would expect her to jump in and get to the bottom of the rash of murders hitting this quiet town; she hasn't yet but will she overcome her prejudices and find the truth?

MURDER HOUSE Part One sets the scene, and was a quick read. It ends on a humdinger of a last sentence and I'm looking forward to Part Two. The extra material was interesting but I didn't find any clues this time.

NB. The murders are quite nasty but are described after the fact, rather than during.