The Prophet Murders by Mehmet Murat Somer is published today by Serpent's Tail and the author has kindly answered a few questions posed by Euro Crime. 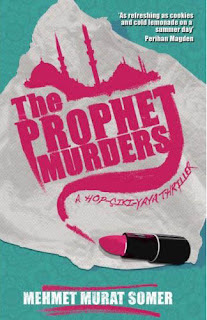 Synopsis: Something’s gone seriously wrong in Istanbul - a killer is on the loose, and transvestites are being murdered, the modus operandi becoming increasingly bizarre with each death. Our protagonist – fellow transvestite, nightclub owner and glamour puss extraordinaire downs her lipstick and ups the ante in the search for the religious nut. Not an easy task with the pressures of everyday life - investigations have to be slotted in between leg and chest waxes and rotating lovers.

Luckily she’s the perfect investigator: she knows everyone on the scene, her maitre d’ is the biggest gossip in town, her web skills are rivaled only by the most nerdy computer geek and she’s very, very persistent.

As the killings accelerate, our girl struggles against the odds in her pursuit - after all, everyone knows that running in stilettos and a black leather cat-suit is hell ! Can she end the slaughter without breaking a nail?

Mehmet Murat Somer was born in Ankara in 1959. After graduating from university, he worked for a short time as an engineer, and for an extended period as a banker. Since 1994, he has been a management consultant, conducting corporate seminars on management skills and personal development. When not working out in the hammam, he writes books in the Hop-Ciki-Yaya series, of which there are now 6.

EC: The Prophet Murders is the first of your books to be published in English. Is it the first in the series? In a nutshell, what is it about?

MMS: The order of the books is a strange story. I wrote The Kiss Murders first, but here in UK and in Turkey The Prophet Murders was published first. So, publishing wise, it is the first of the series. In a nutshell, The Prophet Murders is a crime caper set in Istanbul. The hero is a transvestite detective. By day computer wizz, handsome man, corporate consultant and a skillful hacker; by night hip-underground club owner, glamorous and sexy transvestite, amateur sleuth with an Audrey Hepburn alter-ego.

EC: Where did the idea for the main character come from?

MMS: Two reasons really. First, I believe the media presentation of transvestites is usually negative. They are presented as either slapstick fun material or potential criminals by the media, in bad films and books. For example see the freak transvestite character in The Silence of the Lambs. As a result transvestites are perceived by many as potential criminals, doomed to be street hookers but nothing else, with almost no moral values. I don't agree with this attitude at all. So I wanted to create a likeable, intelligent, witty, refined, well educated hero/heroine with "positive skills". Not the typical, stereotypical drag-queen. Therefore I furnished him/her with contrasting and considerable talents… Plus lots of knowledge and warm wit. Hence I created, I believe, the first transvestite detective.

And the second reason was to create a marketing niche in the presence of many straight, and the few gay /lesbian detectives of crime fiction.

MMS: Yes, I am working on another Hop-Ciki-Yaya adventure. As long as there will be readers and interest, I will produce more Hop-Ciki-Yayas.

EC: Who are your favourite authors (and why)?

MMS: So many with all different reasons. Honore de Balzac is my all time favourite. With his novels he creates a complete panoramic picture of France in his time. A major character from one of his books might have a cameo appearance in another. I like this.

Patricia Highsmith, especially her Ripleys and Those Who Walk Away, I've read and will read over and over.

Naturally Orhan Pamuk! Besides his My Name is Red being one of my favourite books, I believe the Nobel prize Orhan Pamuk won, opened the international door for Turkish writers, including me.

Truman Capote, Christopher Isherwood, Ingrid Nöll… Many more! In fact there is huge list of acknowledgements at the end of The Prophet Murders, as someone said the "the longest acknowledgements in Turkish literature."

EC: Which other Turkish crime novels would you love to see translated into English?

MMS: Alper Canıgüz is my present favourite. Very young one. He only has two books so far, but I find him brilliant. And Perihan Mağden! Although she is not a classical crime author, her recent book (Escape) gave me more chills and thrills than most crime novels.

EC: What do you think about the English crime writers who set their books in Istanbul such as Barbara Nadel and Jason Goodwin? Do you read their books?

MMS: I enjoyed reading them, their oriental perceptions. Although I would say they are quite different: respectively 'contemporary' and 'Ottoman Turkey'. The historical settings of Jason Goodwin are charming since I am also a historical novels aficionado. Top of my list is occupied by Mary Renault, Mika Waltari and the historical novels (Julian) of Gore Vidal.

EC: What can we expect in the second in the series, The Kiss Murders...

MMS: A lady-like transvestite named Buse (i.e. Kiss in Turkish) is murdered. My hero tries to solve the case. Radical nationalists and their political party is in the background. You can expect more joy, more fun, more giggles and a page turner like The Prophet Murders.

Many thanks to Mehmet Murat Somer for answering my questions and Benjamin Usher for arranging it.

UPDATE: The Euro Crime review of The Prophet Murders is now available here.
Posted by Karen (Euro Crime) at 9:53 am

Without a doubt one of the more interesting amateur sleuths to come down the pike. I have recently read some Jason Goodwin, so I have Istanbul on my mind, anyhow. It may be time to investigate The Prophet Murders.

===================
Detectives Beyond Borders
"Because Murder Is More Fun Away From Home"
http://detectivesbeyondborders.blogspot.com/

Great interview! I enjoyed TPM. considering it was a translation, the writing came across very well.

The Prophet Murders is absolutely fantastic. Highly entertaining as well as fast-paced. Shame about the typos (half a dozen or so). Let's hope the rest of Hop Çiki Yaya novels come out soon.

I noticed a few typos, too, but they did not greatly interfere with my enjoyment of the book. Perhaps they should have. I am a copy editor by trade, and it is a shame that copy editing is apparently becoming a disposable luxury in book publishing just as it is in newspapers.
===================
Detectives Beyond Borders
"Because Murder Is More Fun Away From Home"
http://detectivesbeyondborders.blogspot.com/

Hi -
I just received a review copy of The Kiss Murder and was checking out the author online and stumbled on your blog. Really interesting interview and I'm looking forward to reading The Kiss Murder. I'm going to see if I can find The Prophet Murders.

Hi Myckyee - do let us know what you think of The Kiss Murder. And The Prophet Murders if you get hold of it :).

I can let you know what I think of The Kiss Murder!
==============
Detectives Beyond Borders
"Because Murder Is More Fun Away From Home"
http://www.detectivesbeyondborders.blogspot.com/

I have to say I ilke them all and avidly snap them up on release. As a frequenter of the transvestite underworld in London, you may be interested to know that a huge percentage of us wiork in I.T. And I myself have carried out penetration testing work and other legal forms of some of our leading lady's skill set.