Review: The Chessman by Dolores Gordon-Smith 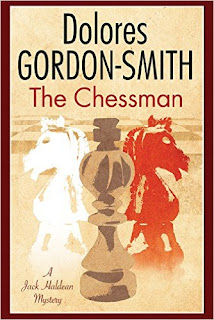 It is a Friday during 1925 in the very quiet, Sussex village of Croxton Ferriers and a couple of local ladies, Isabelle Stanton and Sue Castradon have gone to the church to change the flowers on the altar. As the fresh ones need different sized vases they entered the vestry to fetch them. Puzzled by a strange musty smell there, they opened this large cupboard and were horrified to discover on the shelf next to the vases, a naked corpse, wrapped in a tartan rug. This male corpse had been made unrecognisable by the mutilation of the head and removal of hands and feet.

Arthur Stanton, husband of Isabelle knows that the local village policeman would not be experienced enough to deal with this crime so he telephones an old friend, Detective Superintendent Ashley of the Sussex Police, who agrees to come. Ashley asks for Major Jack Haldean, former Royal Flying Corps hero and present day crime novelist for his help, as, as an amateur detective, he has been involved in solving several previous murder incidents.

Major Jack Haldean, finds in the cupboard where the body had been located, a black marble chess knight with crystal eyes. Soon several notable villagers are receiving typed letters with messages to the effect that their deaths are imminent and the letters are signed "The Chessman".

The day before Sue Castradon had entered the church and discovered the corpse, her solicitor husband Ned had had a violent argument with Jonathan Ryle a drunken chauffeur of local VIP Sir Matthew Vardon, which had been broken up by the local vicar and this event was a hot topic of gossip in the Croxton Ferriers tea-rooms.

The clues follow one another with astonishing speed and I found the story immensely exciting and very fast moving and the pages just shot by. The story is peopled with a very interesting mix of authentic, well described characters. It was very atmospheric and expertly researched giving a real glimpse of life in a Sussex village and the wider country in the 1920s.

There are a few red herrings to draw the reader up the wrong path before the dramatic and gripping conclusion is reached. I was really flummoxed before I reached the end of this book as to how it would end and of course I got everything wrong I'm pleased to say. I read for review her previous book AFTER THE EXHIBITION, the eighth in Jack Haldean series and was so impressed with that book I was very pleased to have this one to review as well.