James Patterson & David Ellis's MURDER HOUSE was released in hardback on 24 September. Prior to that it was serialised in 5 parts. 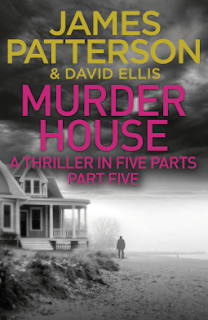 Part Five of MURDER HOUSE covers chapters 96 to 121 plus some supplementary documents. Please note this review may contains spoilers for earlier Parts.

To recap, we're in the Hamptons and handy-man Noah Walker is arrested and tried for the murder of two people who were renting the gothic-looking house at 7 Ocean Drive, known locally as the Murder House. Det. Jenna Murphy, a former NYPD cop who has moved to the Hamptons, initially believes Noah to be guilty and even when it is revealed that he was framed, and is subsequently released, she is still at first, not sure of his innocence.

There are several men who could be the serial killer that Jenna is looking for. She has rattled enough cages to make the guilty party reveal the location of two bodies together with the some evidence which relates to Jenna's mysterious disappearance as a child. Jenna thinks she knows who to trust and who is the guilty party, but is she correct? A tense showdown in the Murder House has all her suspects brought together but things aren't as they appear and Jenna has something important to learn about herself.

The final part of MURDER HOUSE is quite exciting and manages to keep the reader in suspense over who is the bad guy until a very late stage. I did peg the right guy (from the moment he first appeared) but I had several moments of doubt along the way. I don't think MURDER HOUSE was written as a serial as not all parts ended on a cliff hanger but it is an easy read and I was always left keen to read on.

The story does require some suspension of disbelief - all those murders/disappearances over the years in a small town and no-one linked them until Jenna did? Of the five parts, the first is probably the best, but overall this was an entertaining read which kept me guessing. I don't see there being another story about Jenna but I would read it if there was.