I was therefore very pleased to accept an invitation to receive and review each week's serialisation as it comes out. Part One was released 1 September and is reviewed here. 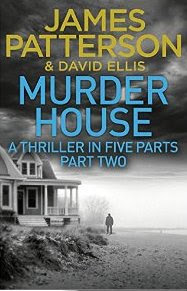 Part Two of MURDER HOUSE covers chapters 28 to 48 plus some supplementary articles. Please note this review may contains spoilers for Part One though I'm trying to keep it vague.

To recap, we're in the Hamptons and handy-man Noah Walker is accused of murdering two people who were renting the gothic-looking house at 7 Ocean Drive, known locally as the Murder House. Det. Jenna Murphy, a former NYPD cop who has moved to the Hamptons, believes Noah is guilty.

In Part Two, we get to find out the result of the trial against Noah, plus what happens to him in the few months after that. In addition we are privy to some earlier murders which took place five or so years before at 7 Ocean Drive, that of two students, and the subsequent murder of a prostitute.

Meanwhile, Jenna has been burying herself in reports about the incident mentioned in the prologue in Part One – where a twelve-year-old shot some of his fellow pupils with a BB gun (a type of airgun). When she looks into her uncle's computer files however, she finds a document that changes the case against Noah dramatically.

With Jenna less convinced about Noah's guilt she takes the first steps in her own off-the-record investigation.

Part Two is slightly shorter than Part One and I have to say I didn't enjoy the several chapters about the killings – these seemed to drag a bit - perhaps because they were uncomfortable reading, however I was back on track as soon as Jenna reappeared about half-way through. She's ditched her slimy boyfriend and she has some sort of connection with Noah, but it's not clear how innocent or guilty he actually is at the moment. I hope the investigation gets moving in Part Three which is released 14 September.