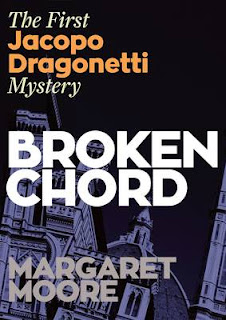 BROKEN CHORD by Margaret Moore introduces State Prosecutor Jacopo Dragonetti known as Drago, in the first novel of the series, set in Tuscany, and one of the first titles published by the new M&G Crime imprint. Born in the UK, Margaret Moore has lived most of her adult life in Italy. She’s married to an Italian, has a large family and a keen eye for detail. The author weaves her extensive knowledge of all aspects of Italian everyday life: music, food, architecture and history into the novel’s setting, creating a vivid, memorable background.

Ursula von Bachmann has been brutally murdered in her own elegant villa on the outskirts of Lucca. A nouveau riche and a despot she has made many bad decisions in her life but it seems that the worst was to let her killer into her bedroom. Her three children by three different fathers, staying with her during the unbearably hot summer, are shocked by the violence of the attack. They suspect that Guido, their mother’s jilted fiancé and a lounge lizard gigolo of the purest water, is the killer. And so the youngest, Marianna, nearly 18, in a world of her own, an older Lapo, with a physical deformity, beautiful face and a cruel streak, and Tebaldo, a recovered drug addict, now a questionable pillar of his own family, cling to the hope that all will be sorted soon. Imprisoned in the villa, they eye each other with increasing mistrust and fear, becoming anxiously aware of their circumstances, the constant presence of faithful yet resentful servants and the echoes from the Second World War as well as the more recent past. With so many people inside and outside the family bearing grudges the situation becomes tense. The components of this complex case prey on the investigating magistrate Dragonetti’s mind during his trips between his ancestral own Palazzo in Florence, police station and von Bachmann’s villa. Things are not what they seem…

Against the backdrop of the sophisticated surroundings, under the unforgiving July sky a much darker toxic side appears to the superficially comfortable peaceful life. Following his own instincts and some false trails Drago unravels a private history of feuds and violence, and tales of a family rich in money but poor in love where jealousies, hatreds and passions run riot.

The opera-loving chain-smoking Drago is a stylish, astute yet empathetic Italian character. Although he reminds me of both Andrea Camilleri’s Salvo Montalbano and Henning Mankell’s Kurt Wallander he is definitely a man in his own right and these comparisons are definitely favourable. He seems to have a fairly normal private life, with a sensible attitude to his own work and not many demons lurking in the background.

BROKEN CHORD, an elegant psychological exploration of a dysfunctional family in a fine tradition of crime mystery is a great read, and I will follow Drago’s investigations and musings in further instalments.