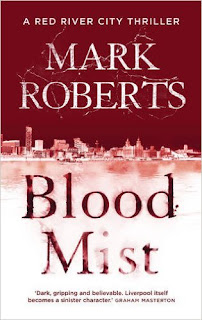 This book is the first in a new series and introduces DCI Eve Clay, who heads a team searching for a particularly nasty, Satanic killer in Liverpool. The book is fantastic! It grips hold of you right away with a tantalizing prologue that feeds you some tasty morsels about Eve’s early life and sets you up, ready, for the horrors that are to follow.

When an entire family is savagely slaughtered in their own home, and DCI Eve Clay is asked to head up the investigation, little does she know that she is about to end up face to face with her own unsavoury past. She also appears to be dealing with a killer, or killers, who know more about her than she knows about herself: abandoned soon after birth, by parents unknown, Eve was first brought up by an elderly nun, Sister Philomena, and then spent the rest of her childhood in a Catholic children’s home after the old woman passes away. Eve is now happily married with a young son and the severe brutality of the murders has her in fear for the safety of her family; especially when she finds out that the killer(s) seem to know her. Her search for answers seems to be heading nowhere but then she receives a telephone call from a deadly name from the past: Adrian White, a sadistic, insane murderer who she caught and helped to lock away many years ago, wants to see her. He has information for her but definitely knows more than he is saying.

When a second family is murdered, Eve knows that she must act quickly before more lives are lost. Her investigations lead her to a very shocking truth that has her dealing with some extremely evil and dangerous people. The reader is left not only horrified by what is going on but also amazed that Eve has turned out to be as sane and level-headed as she has, given where she came from and how she was brought up. I am delighted that this book is the first in a series about DCI Eve Clay. She is a feisty, interesting and likeable character and I am rather pleased that the case she got to solve messed beautifully with my head!

Mark Roberts is a gifted writer and was a teacher for twenty years before putting pen to paper. His last book, WHAT SHE SAW, that was reviewed on Euro Crime last year, was long-listed for a CWA Gold Dagger – which is an indication of how awesome this author’s writing is. As with Robert’s previous books, BLOOD MIST is a hard hitting and disturbing tale. It leaves you chilled, exhausted and most definitely uncomfortable. If you like your crime fiction to be more of a thriller than a procedural detective story, then you are going to love this book. Mark Roberts is another talent to look out for in the future. He has already been added to my growing list of favourites and I am really excited to see what he produces next.