Review: The Cellar by Minette Walters 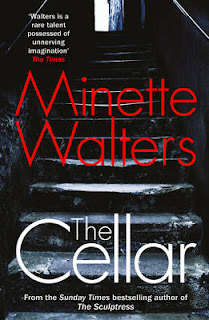 Muna is a young fourteen-year-old girl living in Mr and Mrs Songoli’s house. She is somehow ‘adopted’, not allowed to leave the house, illiterate, and thought not to speak English, but only Hausa. Mrs Songoli (Yetunde) describes her to the police as her brain damaged first born, who finds it hard to learn.

The police are in the Songolis’ house, because their youngest son, ten-year-old Abiola, has failed to come home from school. Strangely, when Abiola went missing, but before the police arrived, Yetunde discretely moved Muna’s mattress out of the cellar, and moved her into a room with a proper bed and a window.

Muna, too frightened to speak, listens to Mr and Mrs Songoli telling the police lie after lie about their missing son and their life together, while Muna’s thoughts tell the reader what has really been happening, uncovering the lies, and revealing all that she wishes she could say. She would really like to tell the police that she needs their help, because she was stolen when she was just eight years old, and she just wants to go home, but she doesn’t know who her parents are or where she is really from. But somehow, she cannot say a word.

The investigations continue, and the external influences of the police presence start to give Muna a strange sort of courage and boldness. Despite intensive searching, Abioloa is not found, and eventually the police leave. But the change in Muna’s behaviour continues, and this heralds the start of the decline and fall of the remaining Songolis: Yetunde, her husband Ebuka and their thirteen-year-old son Olubayo. All of which is somehow helped by the evil influence of the devil in the cellar.

The story mostly unfolds from Muna’s thoughts and observations on life in the Songoli household. The reader gradually discovers the appalling treatment meted out to her over the years, and the stark contrast between her demeaning treatment and life of fear and deprivation, with the extravagant, amoral lifestyle of the Songolis. The devil in the cellar is laughing and wants revenge. Muna responds by taking action. A short intriguing story, clearly commenting on the upsurge in ‘slavery’ that often makes the news, with a few genuine surprises along the way. Recommended.