BBC4 are treating viewers to a 20 episode Danish crime drama, called The Killing (in English) and which takes place over 20 days. 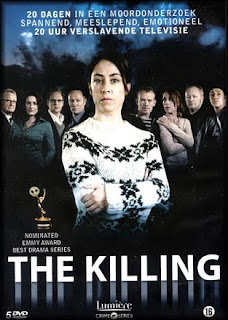 From the BBC's Press Office:

The Killing is the latest foreign language series to première in the UK on BBC Four, following the huge success of the Swedish Wallander. Nominated for an International Emmy for Best Drama, Denmark's hit TV series is a tense and absorbing whodunit, deftly uncovering some of the evils gnawing at contemporary society.

The 20 episodes play out over 20 days during a bleak Copenhagen November. Inspector Sarah Lund reports for her last day at work and learns that a teenage girl is missing. When her body is found in a car with links to a mayoral candidate's office, the case that gripped Danish TV viewers begins.

About to leave her post as the head of investigations at the Copenhagen homicide department as she is moving to Sweden, Sarah is in the midst of saying her goodbyes when she gets a disturbing dispatch which forces her to rethink her plans: a 19-year-old girl, Nanna Birk Larsen, is missing and her belongings have been discovered in a field.

A top Copenhagen politician, Troels, is in the middle of a promising election campaign when he is suddenly forced to make a change of plans. Meanwhile, in Vesterbro, Theis and Pernille learn that their daughter is missing.

In the first instalment of this 20-part thriller, these unsuspecting characters are drawn together by a series of simultaneous events that will change their lives for ever.

This looks pretty gripping. And very much part of the Scandinavian "something's rotten in the state of" - in this case, Denmark. (Where have I heard that before?)

Thanks for this, Karen, looks good. Have you or has anyone heard any details about whether it is actually good? (Always an investment to watch a long series.....and disappointment can set in pretty quick as most TV crime lurches into predictable formula rather quickly - or did, I don't watch it now - was v disappointed in the recent "Blond Swedish" Wallenders - DNF!.)

I've seen this, and actually own it on DVD (it's available as an all-region version from Australia). It's absolutely fantastic - gripping and not at all what you'd expect. Definitely not predictable, and not really Wallander-esque either. It's much more political, and definitely "rotten in the state of".

They've just shown series 2 here (in Germany), which was both equally gripping and gave me actual nightmares after the final episode.

Can only recommend it highly. (Actually, there's several good Danish series out there that I'd recommend looking out for - Unit One and The Eagle spring to mind, though I think the first of the two is better.)

I got the first half of this series on DVD as part of my subscription to an online news service here - it was so very good that I had to purchase the second half when it was released just before Christmas (which I'm sure was all part of their dastardly plan). The whole series focuses on the one case though there is lots of other stuff going on too not just the police procedural elements - but it is almost like a good novel rather than a tv crime show in that it's not a new crime to solve each week. I thought it was very good acting and decent writing - there are lots of themes explored including following the impact of the death on the family of the murdered girl and there is a political thread as the case draws in the campaign of a local politician. Not sure it's anything like a Wallander or whatever else they're comparing it to - to me it's more like Twin Peaks meets Murder One (an old US TV show that followed a single case each season).

Catch the original now before the US remake hits these shores. AMC - the channel that brought us Mad Men and The Walking Dead - is launching a remake in April in the US.

The only English speaking place I can find that has broadcast this is Australia where it seems to have gone down well. I'm making space for it on my PVR!

Gosh, what we miss over here in the states!

Thanks for these recommendations - if Lauren and Bernadette love it, then that is sufficient for me to watch, thanks again.
Maxine.

Was looking at this in the Radio Times today. I am really looking forward to it.

Have just finished watching the first two episodes - BBC4 are showing two at a time - and I found it very gripping. I am already hooked and know I will be sitting down each week to watch it

I too have just watched the first two episodes back to back and found them gripping. The Scandinavian writers and producers certainly know how to do crime series! I enjoyed Wallander immensely and this looks like another well written, well rounded, character driven series that the BBC have managed to get right.Glad to hear there is already a series 2 to look forward to - I just hope the Beeb have the sense to take it up.

It was really god, I thought. Thanks Karen for telling me it was one. I hardly ever read the complete tv guide.

Was also interested to find that the actor playing the charming politician is the brother of Mads Mikkelsen.

First 2 episodes were tremendous. More political than Wallander. Doesn't pull any punches in showing the human cost of the crime. The scene where the parents break the news to their 2 other children was gut-wrenching. Home life complications of the detective echo Wallander maybe? I'm hooked.

I caught up on Thursday and I loved it. My take http://j.mp/g8rwN3, excellent acting, script and characterisation. I'll definitely be watching tonight

Completely hooked its fantastic
cant wait for the next episode....