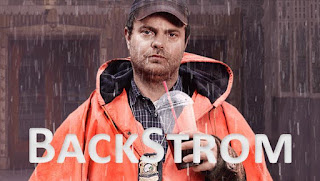 Backstrom, the US series based on Leif GW Persson's Evert Backstrom series of books, begins tonight on Fox UK at 9pm:

"Detective Lieutenant Everett Backstrom is a man with no filter. After a five-year exile to the traffic division for offensive behavior, he has returned from disgrace to lead Portland's newly minted S.C.U. Tasked with navigating the city's most sensitive and serious cases, he must solve each crime as he tries, and fails, to change his own self-destructive behavior."


Backstrom is played by Rainn Wilson and there are 13 episodes in this one and only season as the show was cancelled earlier this year.
Posted by Karen (Euro Crime) at 9:00 am