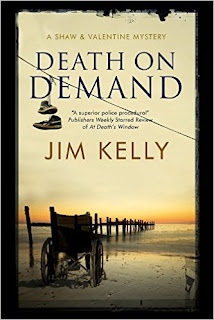 When the newspapers turn up to cover Ruby Bright's 100th birthday, they find her seaside care home is a murder scene. Someone spirited Ruby away by wheelchair down to the water's edge on the idyllic north Norfolk coast, and strangled her. But why kill a harmless centurion? As Detective Inspector Shaw and Detective Sergeant Valentine investigate, it's clear Ruby wasn't the first victim, and nor is she the last. All trails seem to lead back to the old Parkwood Springs estate, close to the docklands. There's only one way in and one way out of the estate - through the derelict Lister Tunnel. But what is the secret within...?

DI Shaw is advised by a very senior officer, that DS Valentine, his partner of many years, will be told that his heavy smoking habit has caused him to develop terminal lung cancer and that he has limited time left. Shaw is told this in confidence so that he may counsel Valentine, when he has been officially told by his doctor.

Thoughts and worries about Valentine weigh on Shaw's mind and are such that investigation of all the many clues regarding the serial murders is taken up more by Valentine than by Shaw.

The descriptions by the author of the Norfolk coast, Hunstanton and around there are very evocative for me and remind me of the many happy times I had on camping holidays in years gone by in the vicinity; and is something I look forward to reading when I have books by this author.

The high quality of the tight plotting of the story of this police procedural is much to be savoured and reading a book with characters that you have enjoyed in previous works is like putting on an old and well worn pair of gloves again and you pick up the previous enjoyment very quickly.

I read his outstanding first book in the Shaw and Valentine series, DEATH WORE WHITE privately and the second one DEATH WATCH for review in 2010 and really enjoyed it and although I had hoped to read his following books, DEATH ON DEMAND is the first one that I've had the privilege of reviewing since.

This was a most enjoyable book and I look forward to reading more by this very gifted author.

Everything Jim Kelly writes is intelligent, extremely well written and engrossing. I look forward to reading this one, thanks!