James Patterson & David Ellis's MURDER HOUSE is released in hardback 24 September however you can read it before then by buying it in 5 individual parts, with the final two parts out this week. 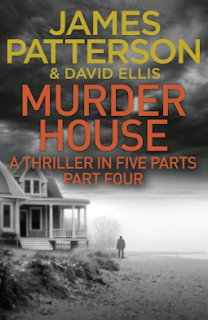 Part Four of MURDER HOUSE covers chapters 75 to 95 plus some supplementary articles. Please note this review may contains spoilers for earlier Parts.

To recap, we're in the Hamptons and handy-man Noah Walker is arrested and tried for the murder of two people who were renting the gothic-looking house at 7 Ocean Drive, known locally as the Murder House. Det. Jenna Murphy, a former NYPD cop who has moved to the Hamptons, initially believes Noah to be guilty and even when it is revealed that he was framed, and is subsequently released, she is still at first, not sure of his innocence.

Jenna is now beginning to believe that Noah is innocent and she forms a team with him and her friend in the Police, Officer Ricketts. They begin to investigate the history of the family that owned 7 Ocean Drive aka the Murder House for several generations, and try to find any possible surviving family members.

The reader knows that the murderer calls himself "Holden" and flashback chapters appear to show the young "Holden" first meeting his mentor.

Meanwhile Jenna has a busy time with both a date, and the discovery of  what was behind her family avoiding the Hamptons for the latter part of her childhood. Jenna then really goes off the rails and breaks the law until she ends up on the wrong side of the table in a police interrogation room where again, we are left on a humdinger of a final sentence.

Part Four advances the story somewhat with information about Jenna's past, "Holden's" past and that of several characters who could be "Holden". The pages rattle along and the information revealed cleverly had me flip-flopping my opinion on who is the bad guy though I'm still fairly sure who he is. Not long to wait until Part Five and all is revealed.