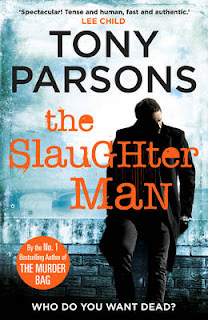 Tony Parsons is an award-winning journalist and author. THE SLAUGHTER MAN is his second crime novel and the second in his series featuring DC Max Wolfe – a skilled detective who lives in London with his young daughter, Scout, and their dog, Stan. The book is written in the first person – from Wolfe’s viewpoint – and this makes it even more hard hitting. The book is extremely disturbing and dark yet also has enough good people in it to stop you losing your faith in humanity. Wolfe’s heart has been shredded by the end of his marriage but he and Scout are close and she, along with Stan, gives him his reason to carry on.

The murder that Wolfe and his team are investigating is brutal. On New Year’s Eve, a whole family is executed, in their exclusive mansion in London, and the youngest child goes missing. The family is beautiful, rich and happy and, to outward appearances, perfect: It appears as if they have been murdered simply because they are happy. The murder weapon is a bolt gun, used to stun cattle before they are slaughtered, and a quick search of the archives takes Wolfe to a killer known as The Slaughter Man, who used the exact same method to kill a whole family thirty years ago. After serving time in prison, this killer is now free but a quick visit to eliminate him from enquiries shows he is dying from cancer and unlikely to be the guilty party this time.

Wolfe has a chase on his hands if he is to solve the crime and find the missing child before it is too late. During the course of the investigation he uncovers too many dark secrets and several times finds that his own life is in danger. Only thoughts of Scout keep him focused and strong. He needs to survive to protect his daughter. Can he also save another young life at the same time?

This superbly-penned book is one of those stories that you can’t let go of. And neither will it let go of you. I sat up late, finished it in two days and am still haunted by it. Fabulous. If you only read one book this year, I would suggest that you try this one. My only regret is that I have not yet read THE MURDER BAG – Parson’s first crime fiction novel that introduces the characters in this one – but that is easily rectified. If you love noir then you are going to love this book as it is definitely on the darker side of dark. But the glimpses of the good side of humanity in it make it even better!