Review: The Golden Age of Murder by Martin Edwards 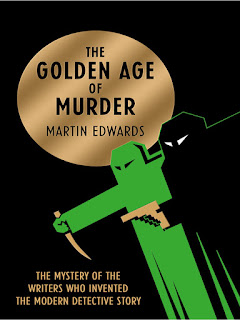 THE GOLDEN AGE OF MURDER is a history of the Detection Club written by crime writer Martin Edwards.

The Detection Club is a dining society for crime writers founded in 1930, and during what is usually called the Golden Age of crime fiction (roughly speaking the period between the two World Wars) it had as its members most of the leading lights of the genre. Martin Edwards, as the Club's Archivist and President elect, is uniquely qualified to write their story, and has produced an entertaining history with loads of human interest.

All of the Club's members get their moment in the limelight, but the majority of the story is carried by three mainstays of the Club: Dorothy L Sayers, Agatha Christie, and Anthony Berkeley Cox. Of these, Christie is of course a household name and Sayers will be very familiar to mystery fans at least. Martin Edwards points out that both had mysteries of their own. Christie's eleven-day disappearance in 1926 has never been fully resolved. Meanwhile, Sayers somehow managed to keep a much-loved illegitimate son quiet for most of her life. The third pillar of the book - Anthony Berkeley - probably qualifies as a forgotten author these days, but was one of the most inventive and influential crime writers of the period. Also one of the crankiest, it turns out (and the not-so-proud owner of an extremely complex love life).

Many lesser lights are fascinating by virtue of their politics, their personal lives, or their approach to the genre. The crime-fiction connections, often related in the end-notes to each chapter, are great. For example, Margaret Cole (half of the left-leaning married couple writing as G D H and Margaret Cole) was sister to Raymond Postgate, who wrote three crime novels including the influential VERDICT OF TWELVE. Raymond's father-in-law was grandfather to Angela Lansbury, famous for playing Miss Marple and of course Jessica Fletcher in MURDER, SHE WROTE. Raymond was also father to Oliver Postgate, inventor of Bagpuss.

One surprise was the debt owed by crime writers to true crimes, which often inspired details in their work or in many cases inspired them to write more socially-aware mysteries. Several members collaborated on a book of essays entitles THE ANATOMY OF MURDER. Founder member of the Club, Millward Kennedy, came unstuck when he was sued for libel by the acquitted suspect in a murder case. Another surprise was the media savvy of the Club, with members working together on plays for the BBC as early as 1930.

As usual with this kind of book, the reader can scribble down recommendations as they read, and nowadays it is becoming a lot easier to own previously out-of-print titles, with even mainstream publishers such as the British Library, Faber Finds, Bello, and Collins racing to revive forgotten books.

A lovely reference book for the classic-crime aficionado, and at 528 pages you won't feel short-changed.

Rich, thanks for this overview. I'm putting it on my Christmas list!