I was therefore very pleased to accept an invitation to receive and review each week's serialisation as it comes out. Part One is reviewed here and Part Two is reviewed here. 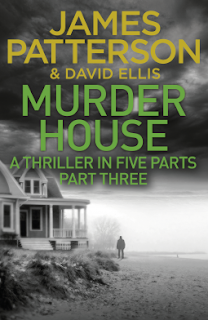 Part Three of MURDER HOUSE covers chapters 49 to 74 plus some supplementary articles. Please note this review may contains spoilers for Parts One and Two though I'm trying to keep it vague.

To recap, we're in the Hamptons and handy-man Noah Walker is arrested and tried for the murder of two people who were renting the gothic-looking house at 7 Ocean Drive, known locally as the Murder House. Det. Jenna Murphy, a former NYPD cop who has moved to the Hamptons, initially believes Noah to be guilty and even when it is revealed that he was framed, and is subsequently released, she is still not sure of his innocence.

In Part Three, much of the time is spent with Jenna. She is not popular with her fellow cops with the exception of a female officer who looks up to Jenna and who is willing to help Jenna with her investigation.

Another murder, from a few years ago, is described and we get to see the planning that our murderer, who calls himself Holden, goes to, to get his victim.

Meanwhile it seems Jenna's investigation is beginning to home in on a suspect, plus we find out why the murderer is using the sobriquet Holden. Several scenes take place at Tasty's, the restaurant where one of the latest murder victims worked and in one scene Holden is there. Is he someone already known to Jenna? In addition another possible suspect (at least I think he is) is introduced as well.

I enjoyed Part Three as the history behind 7 Ocean Drive is beginning to hang together and Jenna is starting to make some progress on the case and she also has a breakthrough about the nightmares she's been experiencing since her return to the Hamptons. I'm anxious to read Part Four to see if some of my suspicions are correct or not.

By David Ellis with billing credit to Patterson. Another writer becomes a corporation. How sad.