I only met Maxine Clarke (aka Petrona) in 2007 and yet it feels like I've known her forever. Our first face to face meeting wasn't in auspicious circumstances as we chose to meet on the day the gales hit Britain. Trains were reduced to 50mph and so I was late. Still, we managed to meet, eat and hit it off. My journey was easier back to the Midlands as I was travelling on a diesel line, Maxine's was a little harder as Waterloo was badly affected.

Aside from emails our next event was a lunch in late summer with the lovely ladies at Quercus, Nicci and Lucy, who handed us a proof of a little known book, The Girl with the Dragon Tattoo...

A few months later we were back together again for the official launch of the book in January 2008: 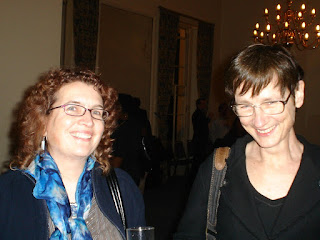 Other events followed including Crime Fest and Harrogate: 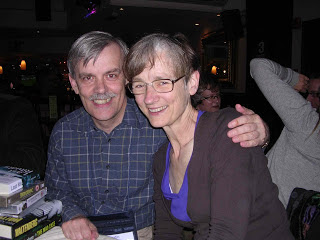 Maxine and I would regularly meet up in London at the Wellcome Centre and most recently Waterstones Piccadilly where we would spend the whole day wandering from floor to floor including the much-maligned and now absent Costa and chatting about books and family. We'd have a huge book exchange and later in the crime section would offer customers advice on which Jo Nesbo to buy.

We continued to do this, though less frequently, during Maxine's lengthy illness. She had been poorly for a long time but you wouldn't know it from her blog and online persona. I used to call her superwoman and she was.

If you've read any of the tributes pouring in you will know that she was a encouragement to her fellow bloggers and was always well up on the new technology - she dragged me into using google reader and twitter - and was supremely well organised with her own blog. She fought blogger to regularly comment on this blog.

And of course Maxine's reviews are peerless and yet she would always be a bit uncertain about them in the note that would accompany them. She was a fast reader and even when ill could read and review a book I'd given her before I'd get back to Birmingham! I can't imagine how many books have been bought as a result of her well-written reviews and that is legacy worth leaving.

Another one of Maxine's innovations and which has brought me and many others huge pleasure is Crime and Mystery Fiction room she set up in Friendfeed. When Friendfeed disappeared for a couple of days Maxine went straight onto Google+ to create a substitute.

Maxine was an expert on Scandinavian crime fiction there were very few titles available in English that she hadn't read and was a fan of the work by Don Bartlett, Neil Smith and Marlaine Delargy who translated some of her favourite authors. Though I think her favourite author was still Michael Connelly.

Maxine was a great friend, a kind and generous person - she would post books all over the world - hugely supportive, great at her job at Nature magazine and loved her family very much. All fans of crime fiction will miss her input and I will miss her hugely as a friend.

(Sadly, I only have one more review from her to run that of The Chessmen by Peter May which I'll post in January.)

Karen - I am so moved by your tribute. Maxine meant so much to us, and it's very kind of you to share your personal memories with us. You're so right that she was a superwoman. Her blog, her contributions to the genre and her willingness - no, happiness - to share her expertise and support new bloggers and authors made her even more special. Her loss is terribly hard on all of us and I know especially hard on you. Thanks for sharing.

A lovely post Karen. Maxine was always excited when she was planning a meet up with you or had just been on one of your day-long trips to Waterstones, I know those trips meant a lot to her too.

Thanks for sharing this with us all

I am really sad to hear about this as Maxine was a lovely person and extremely knowledgeable. It was always a pleasure to talk to her on the rare occasions that we bumped into each other at events. Earlier this year I approached her as she was one of the bloggers that I had invited to contribute to the bloggers post on Books To Die For that I was organising. She very nicely had to decline because as she said due to her ill health she did not feel she would be able to do the project justice and that she would feel awful if she agreed and then could not do so.

Maxine will be sorely missed by those of us who enjoyed reading her reviews and her enthusiasim. The crime fiction community and reviewers as a whole have lost a wonderful person.

Karen, what a wonderful tribute post. I am starting to remember even more about her generosity and her love for her family. It is so sad.

Lovely post, Karen. Funny thing, I used to work with Maxine for a number of years - I didn't know you knew her (though I did know she read crime). I heard through friends today that she had died, so was already thinking of her when I saw your post.

A great post Karen and like Bernadette I know how much she enjoyed those trips to Waterstones. Condolences to you all at Eurocrime.

Karen: Thanks for a heartfelt reflection on someone for whom you clearly had great affection and respect.

I am so sorry to hear this. I never got the chance to meet Maxine in person but she was a regular commenter on my blog and I loved to read her reviews.

It's a sad loss to the world of crime fiction.

A very eloquent and moving tribute and a very moving insight into your personal relationship with Maxine. This makes it such a tragic loss to the crime-reading world.

Thank you for posting this - it's a lovely tribute. I will very much miss her blogs and comments (she was always kind enough to respond to my own rather lengthy comments), and I'm really moved by all the remarks by those who knew her rather better.

I am *so* sorry to hear Maxine has passed away. I didn't even realize she had been ill, though I did note she seemed absent of late from her blog. She was so amazingly well read in crime fiction and I always knew I could depend on her recommendations. Her blog and reviews have been a great resource for me for a number of years. She will be very missed. Thank you for sharing your memories of her.

Thank you very much for this - this is the first I had heard of Maxine's passing. I will miss her very much. I thought her reviews were very inciteful, fair and well written. And I enjoyed her articles on Petrona and occasional emails as well, of course. My condolences to you on the loss of a special friend.