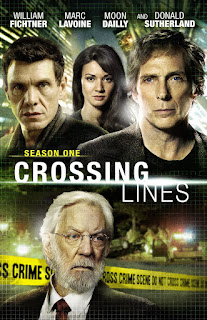 Crossing Lines, starring William Fichtner and Donald Sutherland starts on Alibi next Tuesday at 9pm. The series has recently been renewed for a third season.

As it's a European co-production I gather it is already available on eg German DVD with the option of English audio.

Plot (from Wikipedia): Former New York Police Department officer Carl Hickman's life has fallen apart after he was injured on the job; he has become addicted to morphine and works as a garbage collector at a carnival in the Netherlands. He is recruited to join the International Criminal Court's special crime unit (a fictional unit).

Based in The Hague, it investigates a variety of crimes that cross international boundaries. The unit includes an anti-organized crime covert specialist from Italy, a technical specialist from Germany, a crimes analyst from France, and a weapons specialist and tactical expert from Northern Ireland.
Posted by Karen (Euro Crime) at 12:07 pm