Last night at Foyles we were lucky to have Barry Forshaw interviewing Arnaldur Indridason and Hakan Nesser.

Here's a brief report based on my handwritten notes. 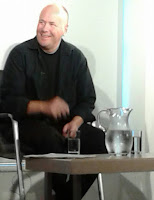 BF asks AI, what gender is Marion Briem?
AI: No idea. If I knew I wouldn't tell you! Difficult to write a genderless character and causes difficulty in French and German - translators must want to kill him. You are not supposed to know. Comes from a time when people were counting how many male characters, how many female characters in a book. Decided to have one you couldn't count.

BF asks HN where is the city of Mardam (where the Van Veeteren series is set).
HN: it is a fictitious country. It was intended to be a series. He didn't want to write about Stockholm as everyone did, so made the place up. HN came to Foyles in 1966 but couldn't afford to buy anything then. But later, through a relationship with an employee, was given a book from Foyles - Lady Chatterley's Lover (hint?). His girlfriend was not paid well so would liberate a couple of books a week. HN was going to return the book but it has been "stolen" again, from his bookcase.

AI wouldn't be tempted to live in the UK.
HN lived in London for 4 years and also lived in Winsford (see his latest book: The Living and the Dead in Winsford) for six months. A small cottage and rain for six months, it would be hard not to write a book in that time.

AI: Erlendur is 33 in Oblivion (his latest book in English, a prequel to the existing 11 book older Erlendur series), he hadn't intended to write prequels when he wrote the first Erlendur books.

HN: read Anne Holt's first book starring Hanne Wilhelmsen - a lesbian detective who rides a pink Harley-Davidson - couldn't top that so went with traditional detective. HN feels his work is mostly done in terms of books published and now the translations need to catch up.
[There are 5 Barbarotti books still to be translated but his long-standing translator Laurie Thompson died recently. Hope to get a new translator and get one into English soon.]

HN: Can't avoid the influence of Sjowall and Wahloo but you do need your historical glasses on when you read them.

AI: likes to include social realism like in the S & W's Martin Beck books. Ed McBain 87th Precinct books are slow - there's a murder but they carry on, could be bus drivers - still fascinating though.

HN: readers from Germany and Sweden now go to visit Winsford. Pleased with the Van Veeteren tv series especially the first three which were 180 minutes long. The later ones were only 90.

Discussion about titles: much more important than you think eg HN had a book, working title Herman Goring, and had just 24 hours to come up with the finished title before it went to press. Couldn't sleep, finally came up with a title: the swallow, the cat, the rose and death, based on the rhythm of an Edgar Allan Poe poem. Also, UK title Hour of the Wolf, in Swedish is Carambole, a type of pool (table) game which was very appropriate.

HN: God has to prove he exits to Barbarotti over 5 books (was intended to be a quartet...)

In response to a question from Sarah Ward re the length of a series, AI said Sjowall & Wahloo made the rule of ten which is a good number though of course it can be broken eg McBain, who they also translated.

Swedish readers like the Winsford book - which is a recent book in Swedish too.
AI said that he wouldn't move Erlendur outside of Iceland - he can't imagine him on a plane.

Neither author reads much crime.

Do also see the tweets from Mrs Peabody.
Posted by Karen (Euro Crime) at 4:16 pm