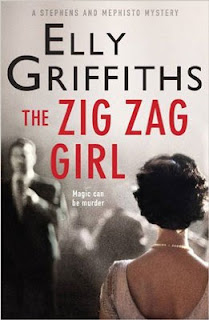 In this first in a new series from Elly Griffiths, the setting is Brighton shortly after the war, and starts with the discovery of a murdered girl, cut up into three parts as it she had been in a magician’s trick cabinet and the trick had gone wrong. The detective investigating the case, DI Edgar Stephens, should know because he was once recruited to join a group of magicians in a special unit known as the Magic Men, during the war. The Magic Men were set the task of using their knowledge of trickery to try to deceive the enemy. While the unit didn’t last long, Edgar had made a few magician friends, and he knew he could contact one of them, Max, to find out his thoughts on the murdered girl. And fortunately, Max was working in a theatre not too far away.

This is a gentle, entertaining read, with a lovely flavour of post-war Britain, the age of gentleman but with hints of the first few changes to come as old ways gradually fall away. Edgar is the perfect gentleman Detective Inspector, and Max Mephisto is a clever, sophisticated and good looking magician, still clinging to his life as a performing magician in the theatre, despite the signs that shows of this sort are slowly declining in popularity. And, there is the intriguing character of Ruby, who applies to be Max’s assistant, but really wants to be a magician. Who is she, what is her connection to events, and why does she apparently disappear into thin air. Slowly all is revealed in this wonderful mixture of magic, and detection rolled into one.