Now Cordon is finished (I have the last 3 episodes to watch), its Saturday night slot - 9pm on BBC Four - will be taken by a repeat of series one of The Young Montalbano. 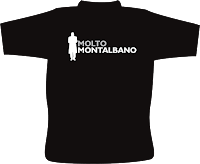 BTW, you can buy this t-shirt from the MHz Network store.

Book-wise we're being spoilt this year with the release of Game of Mirrors which came out in May, with the paperback out in August together with the hardback release of Blade of Light (US: A Beam of Light in September). Both translated by Stephen Sartarelli.

Here's the blurb for the short story collection:

This brilliant collection of short stories, personally chosen by Andera Camilleri, follow Inspector Montalbano from his very first case in Vigata, in which he stumbles upon a young girl lurking outside a courthouse with a pistol in her handbag. When she is taken in for questioning and won't utter a single word, Montalbano must find another way to learn who this mystery girl is trying to kill, and why . . .

Other cases include a missing woman who has run away from the love of her life; an old married couple who appear to be rehearsing their suicides; and a crime so dark there's only one person the inspector can call for help.

With twists and turns aplenty, these stories have all the the wit, mystery and culinary gusto that Camilleri's fans have come to love him for.