Can't get enough of Reacher?

A few years ago I mentioned Diane Capri's series, the Hunt for Reacher in which the FBI try to track down Jack Reacher (the character created by Lee Child), well there's another series which might be of interest to Reacher's many fans, the Get Jack Reacher series by Scott Blade: 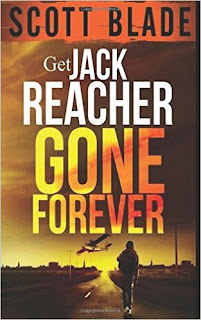 The series begins with Gone Forever which came out a few days ago. The blurb from amazon:

"I am the only Reacher--as far as I know." - Jack Reacher.
With special permission from #1 International Bestseller, Lee Child.
In The Affair, Jack Reacher was sent into a small town to solve a crime. As usual, he snuffed out the bad guys and said goodbye to a beautiful woman. But this time Reacher left something behind--a son. Cameron Reacher. A new generation of Reacher. Cameron learns on his mother's deathbed that his father is a mysterious drifter named Jack Reacher. Jack Reacher is out there somewhere. In order to know his father; Cameron follows in his footsteps--literally. With one thumb out, he hits the road to track down Jack Reacher, but what he gets instead is a town with a deadly secret and a distraught husband fighting to find his missing wife. The need for justice drives Cameron. Like father, like son. (With a special preview of Winter Territory. Book 2 in the Get Jack Reacher Series)