Review: The Ends of the Earth by Robert Goddard 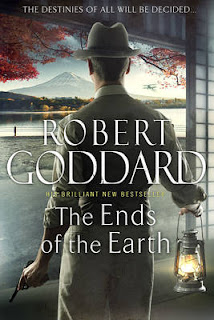 This is the final part in the author's 'The World Wide' trilogy, that started with THE WAYS OF THE WORLD and was followed by THE CORNERS OF THE GLOBE. The first part was published in 2013 and each subsequent one at yearly intervals. So unless you had the books to hand, you may have found the reviews for each book such as on the Euro Crime website invaluable to remind you what has happened so far.

At the end of book two James 'Max' Maxted is drugged and about to be killed, with the murder being made to look like suicide.

Book three opens with Max's faithful friend Sam Twentyman, along with the Americans, Schools Morahan and Malory Hollander, waiting for Sam to join them in Japan. Schools has enlisted a team of five men from the USA to help them to free Jack Farngold, who is a prisoner of the evil Count Tomura. Max had believed that Farngold held the key to why Max's father Henry was murdered.

Soon Sam learns that Max is dead from Pierre Dombreux who works for the German spy-master Felix Lemmer. Dombreux is a French traitor who spied for the Germans and Russians. His estranged wife Corrine was Henry Maxted’s mistress and someone that Max had admired.

Although devastated by the news, Schools, Sam and Mallory agree that they should carry out the original plan to rescue Farngold. Everything that can go wrong does, they are betrayed and Schools and two of the men fall into the hands of the Japanese secret police. Sam and Mallory separately are on the run from arrest.

The author is a master storyteller and just when you feel that the situation can be resolved for the better, it gets worse! There are plenty of twists and turns in this excellent adventure thriller. Although the book comes to a conclusion, there are a few hints that we may hear again from some of these characters. Remember everything is not always as it seems, what secret awaits at the eerie castle in the mountains?

I enjoyed this book just as much as the previous two. I also thought that despite waiting three years for the conclusion that the series worked and worked well. I thoroughly recommend this book and look forward to the next one from the master.