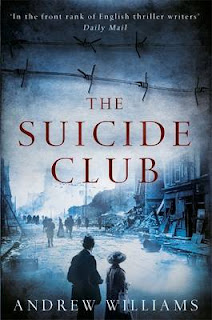 It is July/August 1917 and the First World War has been dragging on in France for three years and is at something of a stalemate. Sir Maurice Cummings or "C" as he is known as the head of the new Secret Intelligence Service summon Captain Alexander Innes fresh from undercover work in Belgium. Captain Innes is a Scot with a gift for languages (he speaks five) and "C" wants him to be attached to Field Marshal Haig's headquarters in France to join an espionage unit known as "The Suicide Club"; his real mission however is to spy on Haig's intelligence chiefs who are suspected of passing incomplete information. "C" particularly suspects a Brigadier Charteris and wants to discover if he is responsible for compromising the Army's network in the occupied territories where agents are being killed.

Innes has his work cut out at GHQ, as he finds he must do daily mind games with other officers of similar rank in order to prove that the work of the Secret Intelligence Service is better than the bad intelligence supplied by the Army to Haig. There is an undercover intelligence source known as "Faust" that Haig seems to put a lot of faith in but Innes believes that hundreds of thousands of British soldiers lives may be lost because of this mistaken belief. Because of the political infighting between Government and GHQ, Innes decides to go behind enemy lines and search out Faust and discover the truth.

THE SUICIDE CLUB is a novel based on real events and draws on the diary and correspondence of Douglas Haig and the diaries and memoirs of the War Cabinet secretary Sir Maurice Hankey. Andrew Williams worked as a senior producer for the BBC flagship Panorama and Newsnight programmes and as a writer and director of history documentaries. I have read previously for review his earlier books TO KILL A TSAR (shortlisted for the Ellis Peters Award and the Walter Scott Prize) and THE POISON TIDE. As with those I really enjoyed this latest, fast-paced, historical thriller and was very impressed with the huge amount of research the author undertook to give a true and fascinating picture of life at that remarkable time. I look forward to reading more books by this gifted author. Strongly recommended.