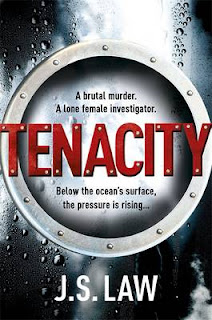 All my doubts whether I would want to spend some time aboard a nuclear submarine two-hundred metres below the ocean’s surface are gone now: the closeness of the boat company’s members (the ‘Old Man’ in charge booms that ‘crews’ are on ships); the ‘constant monotonous routine of sleep-wake-eat-work-eat-sleep’; cramped living and working conditions; no privacy; stale air pumped around the confined space; unexciting food; hierarchy and discipline; an atmosphere of camaraderie and very strict unchangeable rules; the ‘us and them’ division; artificial light; a place where disobedience is punished and brothers-in-arms bonds are indestructible; claustrophobia.

All the facts and characteristics of the place where you ‘dream about coffins’ before you descend into the belly of submarine HMS Tenacity, where Lieutenant Danielle Lewis, Dan for short, the best investigator in the Navy, embarks on a tough assignment.

Dan, recently re-assigned to the Special Investigation Branch’s KILL team, is shocked by the hostility she encounters during her investigation into the suicide of Stewart Walker who died on board of the submarine where he was serving. His wife Cheryl was brutally murdered just a day before his death and Dan also unofficially probes into the circumstances and possible connections between these two events.

No one wants to believe that foul play contributed to Walker’s suicide but the Royal Navy, albeit reluctantly, follow the protocol. Dan’s previous investigation hailed as both a spectacular success and a failure had caused irreparable psychological, physical and reputational damage. It’s told through flashback memories and then more tangible experiences as a new violent assault brings back painful recollections of a vicious attack connected to the investigation.

Dan, a lone wolf in her determination to see justice done, paranoid and anxious, trusts no one. Regardless of consequences, she ploughs through piles of paperwork, continues to interview reluctant and antagonistic submariners and intimidating officers, and refuses to give up and conform. To find answers she leaves no stones, or in this case heavy secret containers, unturned nor unlocked.
Gripping from the very beginning TENACITY is an uncompromising portrayal of working in the Navy, both on land and underwater, and the tensions that this kind of close relationship brings. It delivers a new take on solving crime in a formal yet aggressive environment and on being a woman in a tough place where everybody wants to undermine her professionalism. J S Law’s powerful writing style creates a perfect setting for the thriller where flawed yet strong heroine Lieutenant Dan Lewis fights for justice. This first instalment of a new crime series from debut author J S Law is absolutely brilliant. Cleverly constructed, dramatic and tense it leaves you feeling shocked yet wanting more. I can't wait for the second book.