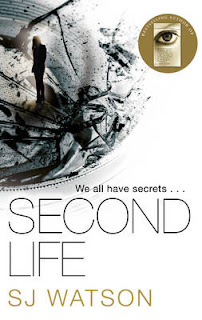 Julia is a photographer, married to Hugh, a hospital consultant, and with a teenage son Connor. But Connor is actually her nephew, the son of her sister Kate, who had Connor when just 16, father unknown. When Kate couldn’t cope as a single mother, she asked Julia to look after Connor and what started as a temporary arrangement turned into a permanent adoption. But, the shocking news at the start of the story is that Kate, now living in Paris with a friend called Anna, has been murdered. The police seem to be unable to find out who did it or why.

Julia starts to become obsessed with finding out what she can, as a way of coming to terms with Anna’s death. She was particularly close to her younger sister, caring for her and helping to bring her up when their mother died. Anna gives Julia a box of Kate’s belongings and she finds the username and password to an online dating website, where she suspects that Kate met her murderer. Going behind her husband’s back, and not telling any of her friends, except Anna, she invents her own profile in the hope that whoever met (and possibly murdered) Kate, will gravitate to Julia.

Possibly part of the motivation behind Julia’s actions is that she is somewhat bored with her safe, middle class life, and is shocked out of her secure existence by the murder of her sister. Before she married Hugh, she had a rather wild existence, culminating in a move to Berlin just after the wall came down with her boyfriend Marcus, staying in squats and taking drugs. Something happened in Berlin that led to her precipitate departure, and subsequent marriage to Hugh, who somehow saved her. Perhaps she now wants subconsciously to overturn her quiet life and go back into something more exciting and potentially dangerous. Small steps lead to larger and larger ones, until Julia is in too deep. The secret life she has built for herself, using the excuse that she is trying to find out what happened to Kate, slowly turns on her until she is trapped, with no way out. Someone is exploiting Julia’s obsession to find out what happened to her sister, but why?

As with his first novel, BEFORE I GO TO SLEEP, SJ Watson again manages to draw a picture of a slowly building obsession, with a gradual racking up of the tension until the final dramatic ending. Perhaps a normal, sensible person might go online to try to find Kate’s boyfriends, but perhaps they might not take the next, more dangerous step, of meeting the possible murderer. Or go even further, as Julia does in this book. So, there has to be at least some suspension of disbelief, as the story progresses. But, Julia is not a sensible person. She is deranged by grief, and susceptible to manipulation and deceit. SECOND LIFE is a tense book, and just as good as Watson's first one.