Review: A Devil Under the Skin by Anya Lipska 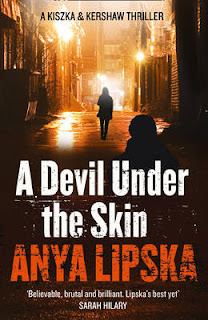 This is the third in the Kizska and Kershaw series, set in London's Polish community, that began in 2013 with WHERE THE DEVIL CAN'T GO.

As the book opens, we have moved on more than a year since the events at the end of book two, DEATH CAN'T TAKE A JOKE.

Kasia, the long-time girlfriend of East London Polish 'fixer' Janusz Kiszka is about to move in with him, having finally decided to leave her useless husband Steve. Kiszka hopes that she is a hundred percent committed to her decision, but has lingering doubts...

Then Kasia fails to turn up. Kiszka visits her home to find that both Kasia and Steve have vanished, leaving one-way tickets to Alicante behind in their flat. He begins tracking them down, starting with Steve's dodgy acquaintances in the local pub. Soon Steve's friends begin dying in mysterious circumstances. As the dead Cockneys begin to pile up, Kiszka realises he needs to call in the police (even though the thought of officialdom makes him feel queasy).

Meanwhile Natalie Kershaw, now a firearms officer in the Met, has been cleared of any wrong-doing after fatally shooting a samurai-sword-wielding maniac outside a McDonald's in Leytonstone. But she still has to endure psychological evaluations before being allowed back on active duty. Has the stab-wound she endured in the last book made her trigger-happy?

Kershaw jumps at the chance to use her rusty detective skills to help out her old ally Kiszka. The hunt leads them from small-time crooks to big-time gangsters, and the investigation turns official, with Kiszka alternately working with Kershaw and hiding his own discoveries from her. Kiszka has some tough choices to make as he gets closer to Steve and Kasia.

An interesting subplot concerns Stefan Kasparek, an elderly hacker with some much-needed IT skills. Who knew that it was Polish codebreakers who first cracked the Enigma code?

A gritty story heightened by its depiction of the Polish community and some good jokes (as usual, Janusz's clownish friend Oskar provides laughs and loyal support to his old army friend).

As with most series, it probably pays to begin with the first book before it's too late, but this works fine as a standalone story. The inclusion of a little glossary and pronunciation guide at the back is much appreciated.

Looking forward to reading this one as I thoroughly enjoyed "Where the Devil Can't Go", and have book No. 2 ready to go on my Kindle. Anya Lipska was a find as her style is exactly my cup of tea!