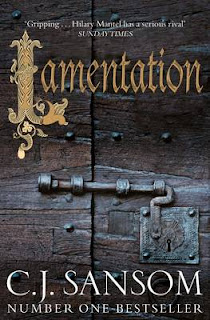 Henry VIII of England is coming to the end of his life, struggling with his weight and health and trying to leave a country that is secure for his only son and heir, eight-year-old Edward. It is a time of religious tension with many factions from reformers to traditionalists vying for his support and attention and also the chance to control the government under young Edward in due course.

Henry's sixth wife, Catherine Parr has written a book - Lamentations of a Sinner - concerning her personal thoughts about faith, which, she believes, is more involved with the study of the Bible rather than the ceremony of the Church. This belief was highly controversial and on advice from Archbishop Cranmer, she decides that the book must be destroyed as her thoughts could be construed as treason - especially by the King. However the book has disappeared and she turns to her old protegy, Matthew Shardlake, now Serjeant at the Court of Common Pleas, in the urgent and dangerous - but very secret mission - to find the book and return it to her.

As Shardlake follows the meagre clues, with his trusted colleague Jack Barak. they are taken into the hidden world of people whose thoughts are so radical that, if found, they would be burnt at the stake for heresy. He also has to tread the dangerous path of palace politics, a world he thought he had left far behind.

The politics of religion and religious freedom made living in the time of Henry VIII very frightening for both noble and commoner with the structures of faith and worship seeming to change almost daily. The author obviously knows the history of this time inside and out and is able to portray the excitement, the politics, the danger and the confusion of it very vividly. LAMENTATION is a must for readers of quality historical fiction.

This is the sixth in the series featuring Matthew Shardlake