Blog Tour: Review of In Bitter Chill by Sarah Ward

I'm very pleased to be included in the Blog Tour for Sarah Ward's debut, IN BITTER CHILL. Regular readers will know that I've known Sarah for a few years and we are part of the Petrona Award team and it has been fascinating to follow Sarah's journey from unpublished to published writer, an arc  which culminated in last week's launch on the hottest day of the year.

I don't feel my review does this excellent and atmospheric book justice but I do urge you to grab a copy for yourself. You won't be disappointed. 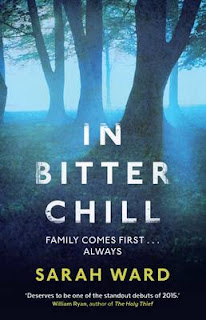 IN BITTER CHILL is Sarah Ward's debut novel, set in the fictional Derbyshire town of Bampton. In January 1978, two eight-year-old girls are kidnapped on their way to school. One of the girls, Rachel, survives but her friend Sophie is never found.

In the present day, Sophie's mother commits suicide on the anniversary of her daughter's disappearance. Her actions precipitate a reinvestigation into the original case: a young constable at the time is now the Superintendent and he gives DI Francis Sadler's team permission to investigate until a more urgent case turns up.

Sadler's team includes fellow local, DC Connie Childs and incomer, DS Damien Palmer who is about to get married – in the very same hotel in which Sophie's mum committed suicide.

The reinvestigation of the kidnapping must needs begin with interviewing Rachel again. Rachel who has little to no memories of what happened to her.

The modern investigation is interspersed with short chapters from Rachel's 1978's experience as well as longer chapters about her current life, her job as a genealogist and her new attempts to find out what happened to her all those years ago.

I absolutely loved IN BITTER CHILL. Within a few pages I felt comfortable and knew I was in for a five star read. I particularly like this kind of countryside noir where you get a strong sense of place and also get to know many of its inhabitants - such as you also get with Martin Edwards' Lake District mysteries or Aline Templeton's 'Big Marge' Galloway series – and was unable to put it down.

I'm very pleased to hear that the police characters will return in a second book, out next year. Sarah Ward gives you enough information to make you like them and be interested in them whilst leaving plenty of mystery to their back stories, especially the lead police officer DI Francis Sadler.

With my library hat on, I noted the absence of graphic violence and bad language so I know from experience that IN BITTER CHILL will go down well at my library!