TV News: The Doctor Blake Mysteries on BBC One 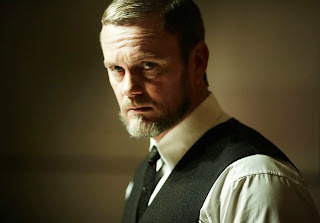 I'm very much enjoying Australian series The Miss Fisher Mysteries on Alibi (based on Kerry Greenwood's books) and now BBC One are to show The Doctor Blake Mysteries featuring Craig McLachlan as Doctor Lucien Blake, and set in 1959 Ballarat. There are ten episodes and they will be on daily Monday to Friday at 2.15pm. The first episode, Still Waters, is on Monday 25th November:


A body found in the lake turns out to be a girl from the local reform school. Lawson immediately suspects a gang of local hoodlums who have connections to the girl and gets Constable Parks to make an arrest. Lawson's ready to charge him, but Blake isn't convinced and together he and district nurse Mattie O'Brien to find out more about the reform school and the girl.

The official series website is here and a second series is being filmed.
Posted by Karen (Euro Crime) at 8:32 pm