Agatha Christie's Hercule Poirot and the Greenshore Folly is available as an ebook at the moment with the print version being released next year. It is £1.99 for both kindle and epub (eg Waterstones, Kobo) and my lovely spy Margot tells me it's a similar price in the US. 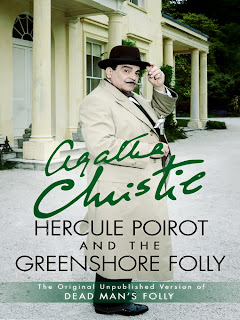 Official blurb: In 1954, Agatha Christie wrote this novella with the intention of donating the proceeds to a fund set up to buy stained glass windows for her local church at Churston Ferrers, and she filled the story with references to local places, including her own home of Greenway. But having completed it, she decided instead to expand the story into a full-length novel, Dead Man's Folly, which was published two years later, and donated a Miss Marple story (Greenshaw's Folly) to the church fund instead.

Unseen for sixty years, Hercule Poirot and the Greenshore Folly is finally published in this eBook exclusive edition, with a new cover by Agatha Christie's most famous cover artist, Tom Adams.
Posted by Karen (Euro Crime) at 11:00 am