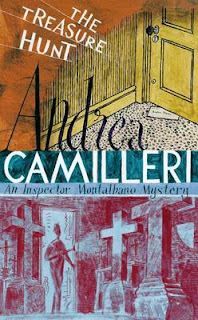 
THE TREASURE HUNT is the latest in the Inspector Montalbano series and opens with a dramatic set piece which sees Salvo shinning up a fireman's ladder to break into a apartment to prevent an elderly pair of devout siblings from shooting people. The apartment is quite disturbing with a roomful of crucifixes and a much repaired blow-up doll in the brother's room.

Matters then calm down in Vigata, - with the exception of a mysterious second blow-up doll being found - there is very little crime, a reason for which is suggested by Catarella and reported to Montalbano by Fazio:

“He says that the robbers, the local ones, who rob the homes of working poor or snatch women's purses, are ashamed.”

“Of their big-time colleagues. The CEOs who drive their companies to bankruptcy after making off with people's savings, the banks who are always finding a way to screw their customers, the big companies that steal public funds. Whereas they, the petty thieves who have to do with ten euros or a broken TV or a computer that doesn't work...they feel ashamed and don't feel like stealing anymore.”

But then Salvo receives an anonymous note pushed under his door, a riddle, a “treasure hunt”. More notes follow and Salvo solves them and visits nearby places. In addition Salvo's long-time friend Ingrid sends a student Salvo's way as the boy wants to see how Salvo's mind works when he solves a case, so Salvo gives him the notes. The treasure hunt keeps Salvo busy until a proper crime occurs: a young woman is kidnapped.


The tone of THE TREASURE HUNT is quite light for about two-thirds of the book. It had me chuckling away - lots of banter between Mimi and Salvo - but then after the kidnapping it gets serious and indeed there is a very unpleasant scene described. As usual there is much to like about this latest Montalbano book it's funny, there's political commentary and an intriguing adversary however the ending was marred for me by its darkness, which not only jars with the tone of the rest of the book, but is probably the nastiest in the whole series to date.
Posted by Karen (Euro Crime) at 10:17 am

Karen - I'm not much on those kinds of endings either, especially in a context such as a Camilleri novel. Still, I'm glad you enjoyed a lot of it - I'm such a Camilleri fan! Thanks for the excellent review.

I agree with your comment about this book's ending. I, too, was laughing at the banter, but then I got upset at the terrible ending. Unnecessary, in my opinion.

I thought there was a turn in the book before this The Dance of the Seagull, in which there was too much blood and gore.

And then this one went even further.

I hope that Camilleri isn't running out of clever ideas on how to wrap up a story, and turning to violence to do it. Or that his publisher is asking that of him.

This book has left me feeling sick and I keep having images of the girl. It is the type of thing that from other, darker literature has led to poor sleep.

Usually I cherish Camilleri's Montalbano mysteries for their light nature and wit, along with subtleties of plot and intriguing cases.

This is a very morbid scene, one I doubt would be likely to play out in reality, and it is highly disturbing. When I read scenes like that that played out in this novel, I wonder - what state of mind must the author have to even dream of such a scenario in the first instance?

There is one particular moment in the book after which I should have stopped reading, as it did perplex me. How could no-one in a public police station have reacted negatively to being mailed a severed lamb's head? To think that is the work of a prankster is absurd.