Review: The Heresy of Dr Dee by Phil Rickman 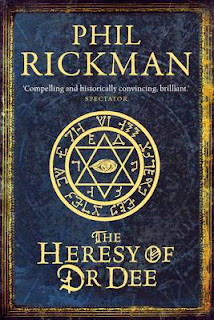 Elias's hands were lifted and, for a brief moment, it was as though the candleglow shone from the hollows of his palms.
Below them, the true source of it, a small planet of light.
It was no bigger than a cider apple.
Beryl, I guessed, a gemstone which comes in several colours and the shewstone possessed all of them.....

September, 1560, Mortlake.
A cold, sunless summer and talk is of portents and the End-time. Queen Elizabeth, two years into her reign, is already doubted by the people and natural philosopher and scientist John Dee has been consulted by the Queen only once since the spring. Dee now needs some kind of financial security, some kind of secure position. He is sitting with his neighbour as a scryer prepares to consult a shewstone. This consultation is seemingly on the neighbour's behalf but it is Dee who is anxious to see a scryer work a shewstone, just as he is anxious to possess such a stone. He has already implied to the Queen, who has a strong interest in the occult, that he has such a thing.

In Mortlake Dee is far from the London scandal surrounding his friend Robert Dudley whose young wife Amy, banished from court by Elizabeth alongside all the other “wives”, has died as a result of a fall from a flight of steps at the home of friends. London is alive with the gossip of the Queen's relationship with Dudley and that he has had his young wife killed so that he may marry the Queen. After what prove to be dramatic events during the scrying, the scryer tells Dee that there are rumours of a perfect shewstone owned by the one-time Abbot of Wigmore in the Welsh borderlands, the birthplace of Dee's father. Later Dee receives a letter from a cousin at court, a confidante of the Queen, summoning him to a riverside meeting next day. But as Dee arrives for the meeting he is escorted onto a barge by two men who say that the plan has changed. When their barge passes that of his cousin's, Dee stands up to call out but he is firmly advised not to do so – or they will slice his tongue from its root....

Phil Rickman's THE HERESY OF DR DEE is the second in his historical series centred upon the real-life character of John Dee, mathematician, astrologer and student of the occult. In this story Dee's drive to acquire a “shewstone” or “crystal” and Dudley's need to be away from London take them both on a journey to the Welsh borders. They travel with the entourage of a judge who has been sent to try a notorious Welsh bandit in an area steeped in the legends and brutalities surrounding the battle of Brynglas where Owain Glyndwr, the last Welsh-born Prince of Wales, triumphed over the English. They travel into a landscape shrouded in ancient folklore and magic and into company that is riddled with political and religious intrigue.

Lancashire-born Rickman worked as a journalist before becoming the author of a successful present-day series featuring Merrily Watkins, also set in the Welsh borders where Rickman has spent most of his adult life. His well-researched picture of John Dee is not one as full of occult menace as has been painted by other authors. Rickman has said “I like blokes who go through life slightly fearfully...” This is indeed true of the John Dee of this book. Rickman presents him as a trusting man who has a genuine belief in the “other worldly” as a provable reality and who devoutly wishes to experience at first hand a true communication with it in order to scientifically measure the methods of that communication.

Not a historical crime mystery as such, THE HERESY OF DR DEE is certainly a story of barbarities and mysteries. I did find a sense of disjointedness now and then, perhaps this is in the nature of its written language. But the book's undoubted strength is in atmosphere: the fear, mud, blood, bones and legends of the Borderlands.

Read another review of THE HERESY OF DR DEE.